Tony Ferguson (25-6 MMA), a former interim lightweight champion, has not competed since suffering a lopsided decision loss to Beneil Dariush at May’s UFC 262 event. That loss served as the third in a row for ‘El Cucuy’, who previously suffered defeats to Justin Gaethje and Charles Oliveira respectively.

Meanwhile, Michael Chandler (22-7 MMA) last competed at November’s UFC 268 event, where he was defeated by Justin Gaethje in a thrilling back and forth war. That setback was of course preceded by a title fight loss to Charles Oliveira at UFC 262. 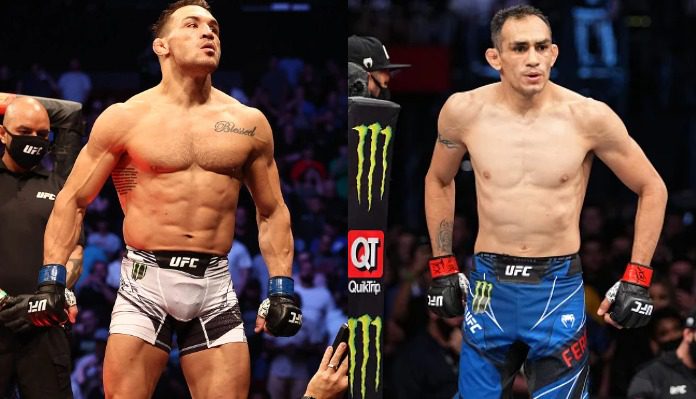 Round one of this lightweight contest begins and Tony Ferguson throws out a low kick that misses. Michael Chandler comes forward and looks to land a right hand. Tony keeps him a bay with a body kick. ‘Iron’ lands a pair of low kicks. ‘El Cucuy’ replies with a front kick up the middle. Chandler lands a nice jab. Ferguson counters with a left hand and Chandler drops. The former Bellator champ is back to his feet but Ferguson is on him with more punches in bunches. Michael Chandler swings and misses with a wild left. A good left hand connects for Ferguson. Chandler shoots in and lands a big takedown. He begins working from the full guard of Ferguson. ‘El Cucuy’ with some nasty elbows from off of his back. Chandler is cut open now. He begins to land some decent shots from top position. A big elbow gets through. Now some right hands. One minute remains in the round. Tony Ferguson looks for a kimura sweep but it is not there. More right hands from Michael Chandler to close out round one.

Round two of this UFC 274 lightweight fight begins and Michael Chandler lands a front kick and Tony Ferguson is out cold.

Who would you like to see Chandler fight next following his KO victory over Ferguson this evening in Phoenix?