Till vs. Brunson was revealed earlier this week to take place as the headliner of the UFC’s August 14 event. However, no venue or location was announced for the card at the time. Most figured it would take place in Las Vegas, where the UFC has exclusively held its Fight Night cards for the past year, but according to Bisping, the fight takes place in London.

Taking to his social media on Friday, Bisping revealed that he will be behind the mic when the UFC heads back to England this summer for the Till vs. Brunson UFC Fight Night card. “The Count” later deleted the tweet but not before he had already revealed the news. It’s possible that the location is not officially set yet, but it seems like London is on the radar. 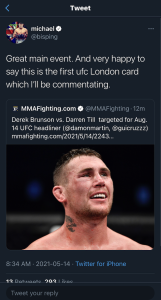 This news from Michael Bisping jives with what ESPN’s Ariel Helwani tweeted earlier this week when he revealed that the UFC was looking into the card taking place in London.

UFC is exploring the possibility of holding an event in London, England in August, sources say. Not finalized. Obviously lots at play, but it has definitely been discussed and is under consideration.

UFC is exploring the possibility of holding an event in London, England in August, sources say. Not finalized. Obviously lots at play, but it has definitely been discussed and is under consideration.

If the UFC does head back to England, it would be the first time the promotion has visited the country since UFC Fight Night: Till vs. Masvidal in March 2019. The organization was supposed to hold a card last year in London that was headlined by Tyron Woodley and Leon Edwards, but the card was canceled due to the COVID-19 pandemic. It appears as though, with the world starting to get back to normal, the UFC is looking to go global once again.

How excited are you for the UFC to head back to London?