The former UFC middleweight champion last fought in the cage in 2019 at light-heavyweight. He got knocked out by Jan Blachowicz at UFC 239 and discussed retirement following the fight.

However, in 2021, Rockhold announced a return to the UFC. He was originally set to face the rising Sean Strickland at UFC 268 in November. He was forced to pull out of the fight due to injury, but the former champion isn’t ready to hang up the gloves just yet.

Luke Rockhold recently took to Instagram to show himself training, alongside a caption teasing a June return. The caption referenced wine, which many took to be a shot at fellow middleweight Paulo Costa.

His former foe Michael Bisping has weighed in on his potential return to the middleweight division. The two fought twice before, with the former champions splitting the series 1-1.

The Brit believes that Luke Rockhold is likely only one bout away from fighting for the title. Thanks to Israel Adesanya’s dominance on the division, he’s running out of challengers, which benefits Rockhold. 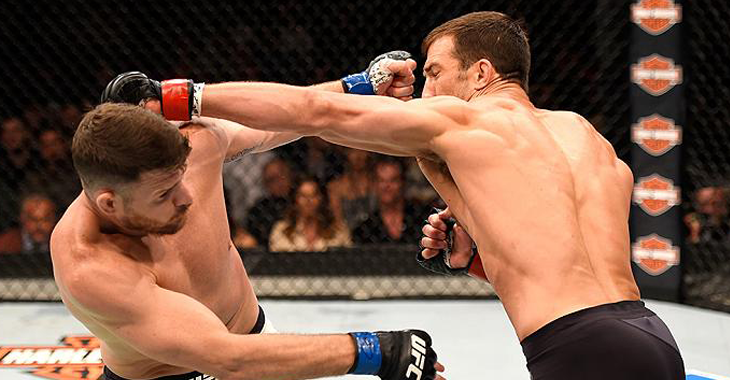 “People forget about the body of work he had. What he’s capable of. The top control, what he can do to people. The damage he can do to people. The kicks, the length, the size, the kind of athlete he is. He’s a world-class surfer, skateboarder, excellent jiu-jitsu. If he comes back and beats [Paulo] Costa, he’s right back in the mix. If he could beat a Costa, you could see a title fight for him pretty, pretty quick.”

As of now, Luke Rockhold doesn’t have a date or opponent set for his return. However, if he does return with a big win over a ranked opponent, one has to figure he’s on the shortlist for a title fight next.

What do you think about Michael Bisping’s comments about Luke Rockhold returning?