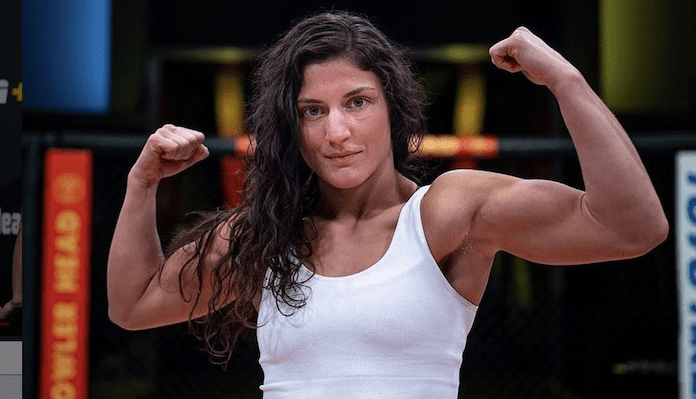 In what was the fastest turnaround in modern UFC history, Godinez stepped up on short notice and took on a bigger Luana Carolina in a women’s flyweight bout on the UFC Vegas 40 undercard. Godinez fought last weekend in a UFC women’s strawweight bout where she picked up a submission win over Silvana Gomez Juarez in an amazing performance. When Sijara Eubanks was forced off of the card due to COVID-19 protocols, she was replaced by Godinez on short notice, who moved up a whole weight class to take the fight. Ultimately, it did not prove to be a winning move as Godinez lost a close fight. But she has no regrets.

Taking to her social media following the loss to Carolina, Godinez issued a statement where she said she was proud of herself for taking a risk despite the eventual losing outcome.

Loopy Godinez: I would do this again and again !! No regrets, I love this so much and I’m not scare to fall because I’ll get up !! And keep going .. My heart is full I feel extremely happy for having the opportunity to compete in the biggest organization in the world and I got to do it 2 times in 7 days how lucky !! We only got 1 life and is up to you how you want to lived so don’t be scare. Is better to fall and learn then never know !! Go for it ….. I promise is worth trying.

With the loss to Carolina, Godinez dropped to 1-2 overall in the UFC with a previous split decision loss to Jessica Penne earlier this year. While she does have a losing record in the company, the fact she took this fight on short notice will likely endear herself to the promotion’s matchmakers, and so it seems likely the organization will give her a new deal.

What do you think is next for Loopy Godinez following her unanimous decision loss to Luana Carolina at UFC Vegas 40?