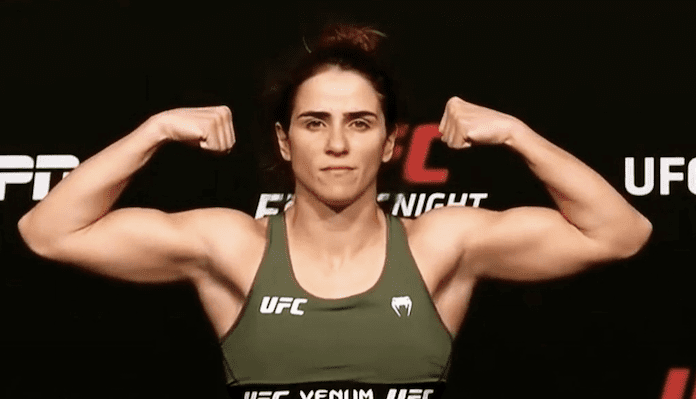 One of the very few 145lbs women’s featherweights on the UFC roster, Dumont was originally set to face former UFC Holly Holm in this fight. However, Holm was replaced by Ladd on short notice due to injury, and Dumont entered the fight as the underdog against a highly-ranked opponent in Ladd. Despite being the underdog, though, Dumont put on another solid performance as she won a unanimous decision in her first five-round fight. Dumont is now 3-1 overall in the UFC and is proving herself as a legit contender at 145lbs.

Taking to her social media following the win over Ladd, Dumont reacted to the best victory of her career, thanking her coaches and her management for getting her where she is.

A post shared by Norma "The Imortal" Dumont (@norma_dumont_mma)

Victory! Thanks to all who accompany me and are always cheering along with me. We are only at the beginning!

Dumont is only 31 years old and she only recently moved to Las Vegas to take her career to a whole new level, so there is still a lot of upside with this fighter. Despite suffering a brutal knockout loss to Megan Anderson in her UFC debut last year, Dumont has shown against Ladd and Felicia Spencer that she is one of the best fighters in the world at her weight class. With UFC women’s featherweight champion Amanda Nunes always having trouble finding new contenders in this weight class, Dumont is automatically a title contender in a shallow division. It’s possible the UFC will look to re-book the Holm fight as a potential No. 1 contender match, or just outright give her the next title shot.

What do you think is next for Norma Dumont following her loss to Aspen Ladd at UFC Vegas 40?