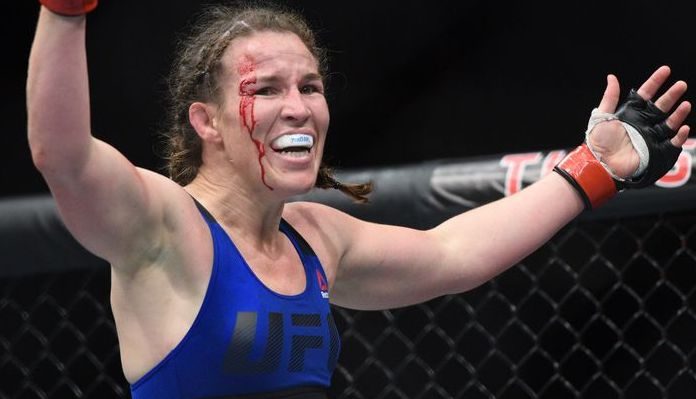 Leslie Smith, who was scheduled to compete on the canceled Bellator 241 card, has revealed Bellator paid her more than double the $20,000 the fighters on the ill-fated UFC London card received for their canceled fights.

All MMA events have been thrown up in the air due to the coronavirus pandemic. Bellator decided to postpone its events for the foreseeable future—including the Bellator 241 event Smith was supposed to fight Jessy Miele on. The UFC has also put its events on hold and canceled the UFC London card on March 21. However, UFC president Dana White intends on returning to action next month with a revised UFC 249 card.

It’s not just the organizations that are suffering during this shut-down, fighters have taken a hit too.

According to reports, the UFC only paid fighters $20,000 for the canceled UFC London card.

“I’m told the fighters who were slated to compete on the ill-fated London card on March 21 received no more than $20,000,” Ariel Helwani reported. “As you can imagine, some of the higher earners aren’t too pleased with that amount, while others were happy to get something for nothing.”

This conflicts with prior reports that fighters would receive their “base fighter pay”. It also remains unclear if fighters will receive compensation for other cancelled UFC cards. In comparison, after Bellator 241 had to be postponed, the company announced they would be paying all fighters and staff in full — Smith included.

“Think about this, it was not just the fighters who needed to be paid, it was the officials, the referees, the judges and the State Athletic Commission staff,” Bellator boss Scott Coker told Metro. “We paid everybody, including our vendors. Everybody got paid, especially the fighters. A fighter fights maybe three times a year?

“With this virus, we had no idea how long we were going to have be out. It could be the last time they get paid until the fall. To me, it was the right thing to do and we had to do it.”

Leslie Smith, who previously fought for the UFC and has been outspoken about the way the promotion treats fighters, had some interesting things to say about the UFC London payouts.

I got more than double $20k from Bellator. And Bellator has a life insurance policy. Feeling good about my career choices right now https://t.co/fZTk8gnmdW

“I got more than double $20k from Bellator. And Bellator has a life insurance policy. Feeling good about my career choices right now,” Smith wrote on Twitter.

Do you think the UFC needs to follow in the footsteps of Bellator and pay all their fighters in full? Let us know in the comments.