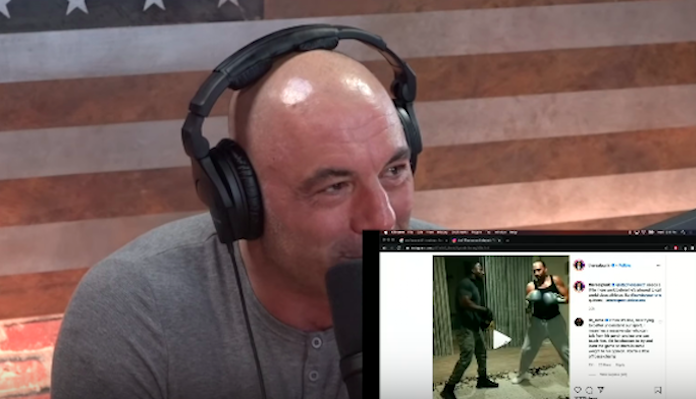 ESPN personality Stephen A. Smith has been getting roasted by fight fans all week. The latest member of the MMA community to join the pile-on is UFC commentator Joe Rogan.

The cause of the widespread attack on Smith, for those who have been living under rocks, is twofold.

First, Smith made some disparaging comments about Donald Cerrone after the recent UFC 246 broadcast concluded, essentially accusing the fan favorite veteran of quitting in his fight with McGregor.

Shortly thereafter, Smith then shared footage of himself hitting pads, which was so devoid of technique that he immediately discredited himself as a voice of authority when it comes to combat sports.

Rogan, a life-long martial artist, got to talking about Smith with guest Josh Thomson on a recent episode of the Joe Rogan Experience.

“Someone needs to explain to me what’s happening here. It looks like he’s punching a baby,” Rogan said to Thomson as the pair watched the footage of Smith’s pad work. “This guy should not be allowed to talk about fighting.”

After trashing Smith’s training footage, Rogan and Thomson shifted their attention to the ESPN commentators comments about Cerrone

Thomson then posited that Smith will probably not be treated very warmly by UFC fighters after the way he spoke about Cerrone. Rogan agreed, reminding that losing a fight is an incredibly emotional experience, and implying that a little more tact should be exercised when discussing defeated fighters.

“Losing a fight is so much different than losing a game [in another sport],” Rogan said. “It’s not the same.”

Do you agree with Joe Rogan on this one? Is Stephen A. Smith out of his depth when it comes to combat sports?