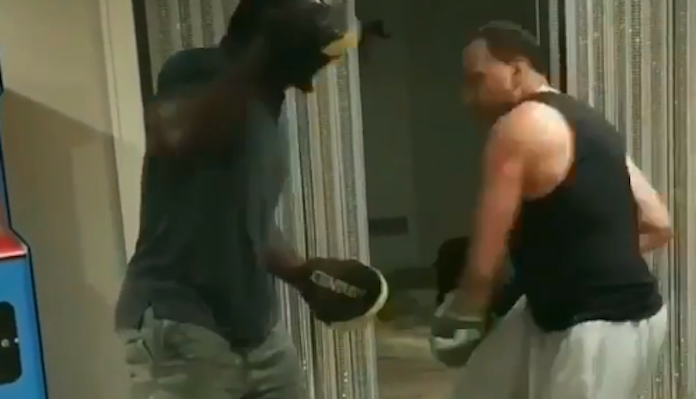 The mixed martial arts community has taken to social media in order to roast Stephen A. Smith following footage being released of him hitting the pads.

Smith has been slowly but surely making his way over into the world of MMA over the last year or so as a direct result of ESPN’s growing relationship with the UFC. However, despite what many would think are his ‘best intentions’, he has been rubbing some fans the wrong way.

The main reason for that is due to some of his recent comments regarding Donald “Cowboy” Cerrone in the immediate aftermath of UFC 246.

Smith came out and said that Cerrone gave up in the fight, which caused a minor storm on social media with fans and fighters from around the world calling him out. Then, when footage of him hitting pads hit the World Wide Web, it was a field day for the masses who decided to tear into the TV personality at will.

The argument in favor of Stephen A. Smith — from the likes of Daniel Cormier — is that he’s actively trying to learn more about the sport, which some view as admirable. However, a lot of people have taken exception to that by suggesting Smith shouldn’t have opened his mouth and talked trash about “Cowboy” in the first place.

Who’s the pad holder prepping Stephen A. Smith to strike at with that two piece, anyways? Dr. Evil and Mini Me? Jfc… pic.twitter.com/SllEggZAaE

Stephen A. Smith out here looking like he couldn’t hit water if he were in a leaky boat…pic.twitter.com/IkLHlm7Z6g

When your preparing for cowboy and his son just Incase they come after him 😂..need to see more reporters hit pads 😂 pic.twitter.com/tIEylSKSsD

Hey, @stephenasmith, I'm going to let you finish your mitt session, but please, for everything that is holy at ESPN, please keep your #MMA opinions to yourself, thanks. https://t.co/qNxWYLLKEW

There always seems to be an incredibly thin line between what is right and what is wrong in this sport and in combat sports as a whole, and Smith constantly plays with that line on a day to day basis.

At the very least, having someone with this sort of mainstream appeal is going to benefit MMA in one way or another – even if it isn’t immediately obvious as to what those benefits are.

What are your thoughts on the way Stephen A. Smith talked at UFC 245? Is the way he’s getting roasted fair punishment for those comments?