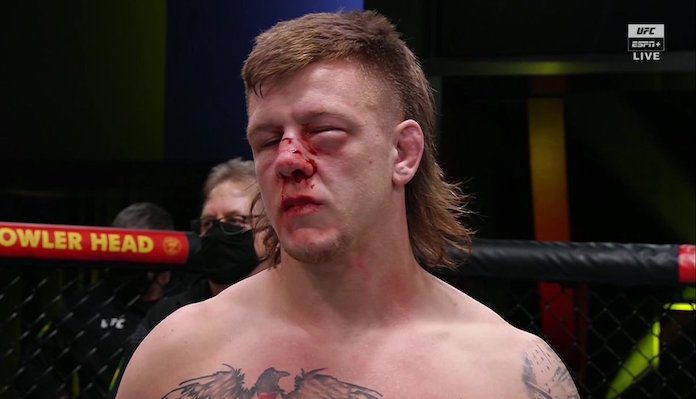 Hill needed just 48 seconds to drop Crute and knock him out with follow-up punches on the ground. For Hill, it was a huge bounceback win after getting finished by Paul Craig in devastating fashion in his last outing. For Crute, meanwhile, it was a brutal KO loss, and his second straight defeat via stoppage after losing via TKO to Anthony Smith in his last fight. To make matters worse, Crute appeared to suffer damage around the eye area of his face.

Taking to his social media following UFC Vegas 44, Crute issued a statement regarding his loss to Hill and what could be next for him. Take a look at Crute’s full statement below.

Jimmy Crute: Down but never out. Plenty of things to work on and I definitely need to change some things up. This is the fight game and it’s a game that I love to play. I had fun out there even if it didn’t go my way. Congratulations to @sweet_dreams_jhill well deserved victory. See you again at the top mate

With the loss to Hill, Crute dropped to 4-3 overall in the UFC. After winning four of his first five fights in the promotion, Crute has now lost his last two fights in a row and obviously needs to make some serious changes if he is going to continue to stay ranked in the top-15. That being said, Crute is only 25 years old so there is plenty of reason to believe that he can bounce back, but as of right now he will need to take some time off and heal up.

What do you think is next for Jimmy Crute after being knocked out by Jamahal Hill at UFC Vegas 44?