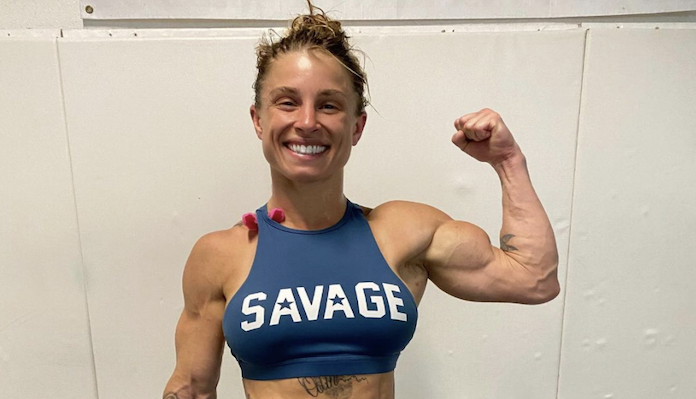 UFC women’s strawweight prospect Hannah Goldy tested positive for COVID-19 and her fight with Jessica Penne at UFC 260 is now off.

Hannah Goldy hasn’t fought since August 2019, while Penne hasn’t competed since April 2017, so both women were very much looking forward to stepping back into the Octagon again. Unfortunately, they are both going to have to wait a little bit longer to do so. On Wednesday, Goldy announced on her Instagram that she has tested positive for COVID-19. The Florida native says she is hoping the fight with Penne is rescheduled for a future date.

Life is crazy man. I literally can’t even believe I have to tell y’all that I won’t be fighting this Saturday. Flew out to Vegas and tested positive for COVID. I have never felt better, stronger or more complete. I was so ready to perform for y’all Saturday, unfortunately that was not Gods plan. I’ll be taking the necessary precautions and rescheduled as soon as I am healthy! I am so sorry guys. And I am so sorry @jessicapenne I have been looking forward to sharing the octagon with you. I will keep everyone updated. Thank you guys for all the support.

Goldy (5-1) has only fought once in the UFC, a unanimous decision loss to the aforementioned Granger on the Colby Covington vs. Robbie Lawler card two years ago. The 28-year-old Goldy was signed following a win over Kali Robbins on Dana White’s Contender Series. However, she will now have to wait longer to return to the Octagon.

Penne (12-5) hasn’t fought since losing to Taylor four years ago at UFC Fight Night: Swanson vs. Lobov. Overall, she is 1-3 in the UFC. The 38-year-old Penne had been battling USADA over the last few years and was only recently cleared to return. Unfortunately, the fight is off. There is still a chance the UFC could find a new opponent for Penne, but given the short notice, it seems more like the fight with Hanah Goldy is rescheduled.

UPDATE: Nolan King of MMAjunkie reports the bout will be rescheduled for April 17.

Per source, the Hannah Goldy vs. Jessica Penne fight originally schedule for #UFC260 is expected to be rebooked for the #UFC event on April 17.