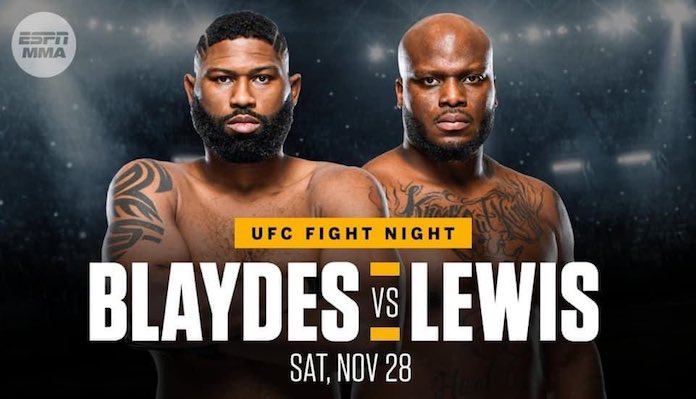 The full betting odds have been released for the 11 fights scheduled to take place at Saturday’s UFC on ESPN 18: Blaydes vs. Lewis event.

In the main event, No. 2 ranked heavyweight Curtis Blaydes looks to continue his rise ascent towards the title when he takes on No. 4 ranked Derrick Lewis. Both men have been hot as of late, with Blaydes riding a four-fight win streak into this bout and Lewis currently riding a three-fight winning streak. Blaydes is an elite wrestler with improving striking abilities, while Lewis is always dangerous with his KO power. The winner of this fight couldn’t be more than one more win away from getting a heavyweight title shot.

In the co-main event, former light heavyweight title challenger Anthony Smith will look to get back into the win column when he takes on Devin Clark. Smith is currently ranked No. 6 in the division but following back-to-back lopsided losses to Glover Teixeira and Aleksandar Rakic, it remains to be seen how much he has left in the tank. As for the unranked Clark, he is coming off of back-to-back wins and in his last fight he picked up a unanimous decision victory over Alonzo Menifield.

Check out the complete betting odds for UFC on ESPN 18 (via MMAOddsbreaker.com).

Who do you like for bets at UFC on ESPN 18: Blaydes vs. Lewis?