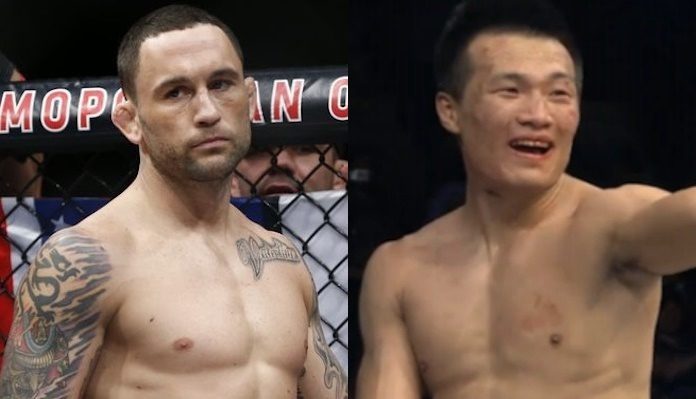 The opening betting odds have been revealed for the featherweight main event at UFC Busan between Frankie Edgar and “The Korean Zombie” Chan Sung Jung.

The UFC announced yesterday that with Brian Ortega injured and unable to compete, Edgar will now take on The Korean Zombie in the headlining fight at UFC Fight Night 165, the last UFC event of 2019. The card takes place on December 21 at Sajik Arena in Busan, South Korea.

The online sportsbook BetOnline first released the opening odds for Edgar vs. The Korean Zombie. Here they are, courtesy of BestFightOdds.com.

Considering Edgar is taking the fight on short notice, it’s not a surprise to see him as the underdog in this fight. That being said, as far as championship experience goes, there’s no question Edgar has more of it, having been the former UFC lightweight champion.

Edgar last fought this summer at UFC 241, losing a unanimous decision to Max Holloway in a failed bid to capture the UFC featherweight title. Prior to the Holloway fight, Edgar had won a unanimous decision over Cub Swanson. Edgar was set to take on Corey Sandhagen at UFC Raleigh in January at 135lbs but he instead decided to move back up to 145lbs for this short-notice opportunity against The Korean Zombie instead. It remains to be seen if he will still fight Sandhagen at bantamweight next month.

The Korean Zombie, meanwhile, is coming off of a huge TKO win over Renato Moicano back in June. In his fight before that, he lost via KO at 4:59 of the fifth round to Yair Rodriguez in one of the greatest fights of all time. Since returning to the Octagon after completing his mandatory military service in South Korea in 2017, The Korean Zombie is 2-1 with a KO win over Dennis Bermudez as well. Though Edgar isn’t the fighter he once was, getting a win over him here could help propel The Korean Zombie to getting a title shot at 145lbs.

Who do have your money on considering the opening betting odds for the Frankie Edgar vs. The Korean Zombie fight?