‘Junior’ retired from MMA following a loss to Merab Dvalishvili at UFC 278 last August. Prior to the bout, the Brazilian stated that he would retire if he loses, as he was disinterested in fighting for anything but titles. After UFC 278, he kept his word and retired.

Along with that, despite having one fight left on his contract, the UFC released the former champion. Thus, freeing up Aldo to go and compete under a different promotion, or a different sport if he wants to. It seems that the Brazilian will be opting for the latter option.

Jose Aldo is currently expected to make his professional debut on February 10th, in Brazil. His opponent, weight class, and the number of rounds are currently unknown. However, details surrounding his professional boxing debut will likely emerge in the coming weeks.

However, it hasn’t been all great news for the former UFC champion. As first reported by Extra, Aldo and his wife, Viviane Pereira Oliveira, reportedly received pandemic funds from the Brazilian government. Specifically, the MMA fighter’s wife’s name was found on a public financing website as having received payment from the government. 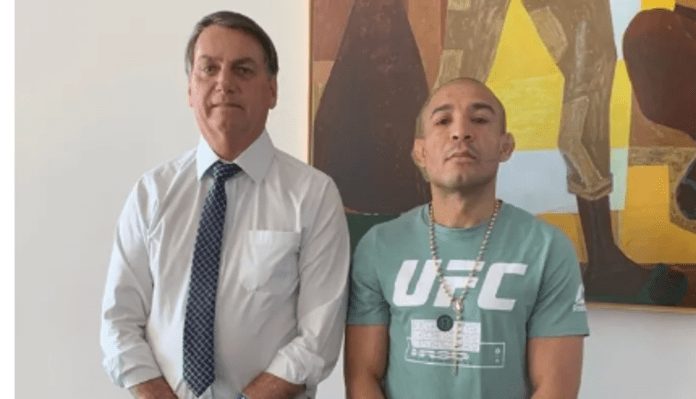 The payments were designated for the poorest families in Brazil during the height of the COVID-19 pandemic. Furthermore, Oliveira was reportedly not registered under Brazil’s platform for social programs. Thus, making her ineligible to receive the emergency money.

For her part, Jose Aldo’s wife later released a statement on social media, reading: “Just because we put Bolsonaro in our house, the leftists are now snooping on our life. I have never received or registered for emergency help.”

Her comments come in reference to their friendship with former president Jair Bolsonaro. The former Brazilian politician fleed to Aldo’s Florida mansion following the end of his presidential term in January.

This article appeared first on BJPENN.COM
Previous articleBryce Mitchell claps back at Sean O’Malley following his recent troll job: “Your making it real personal. Talking about my family and money”
Next articleKelvin Gastelum forced out of UFC Vegas 67, Sean Strickland vs. Nassourdine Imavov now headlines the event
© Newspaper WordPress Theme by TagDiv