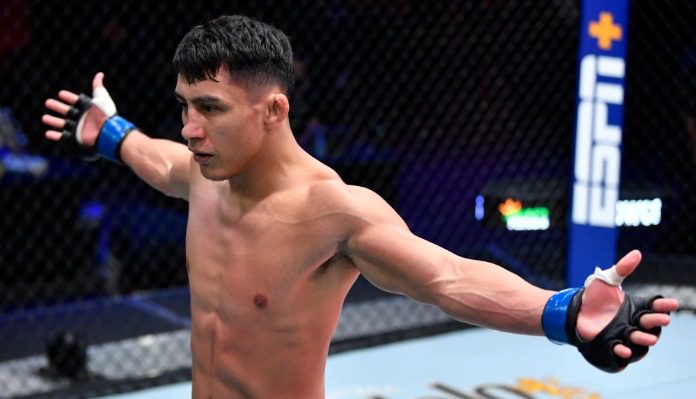 Fernie Garcia thought he would get to the UFC much sooner than this.

Garcia, a Fortis MMA fighter, started out his career 5-0 and got a big win on the Chuck Liddell vs. Tito Ortiz 3 card. He dropped a split decision in his next fight but then went on a five-fight wining streak including getting a TKO victory on the Contender Series to earn his contract.

“No, not at all, after that fight I thought I was on top of the world but shortly after that is when I received my first loss,” Garcia said on Just Scrap Radio on BJPENN.com. “It was a very close, split decision that I thought I won. It made me realize I was beatable and had some holes in my game that I needed to fix. I believe they are fixed now and now I’m on the five-fight win streak.”

After getting his contract, Garcia was hoping for a quick turnaround but that wasn’t the case. Instead, he will make his debut at UFC 274 against Journey Newson who he says is the perfect opponent.

“I couldn’t ask for a better opponent to test my skills against… I think I match well against him and a lot of people in my division,” Garcia said. “I’m very jab heavy, there are no secrets on the way I fight, volume, stay in your face until you make a mistake or I make you slip and make you pay the consequences.”

Against Newson, Fernie Garcia plans to be aggressive and mix in his striking and wrestling to wear out the three-fight UFC veteran. If he can drag Newson into the deep waters he believes one of his big shots will land and that will get the stoppage win.

“I wear you out with pressure and one of the big punches will eventually land and it landed on the Contender Series,” Garcia said. “I’m not going to change it up, I’ll stay in his face, throw my combinations and I’m sure one will land. This is the big show so I will be a lot more careful.”

If Garcia gets his hand raised as he thinks, his goal is to make a quick turnaround and fight on the Austin, Texas card in June.

“I can’t wait to go in there and throw myself in the mix. The plan is to have three fights this year, I want to fight in July, August, and the end of the year. But, whenever the card in Texas is, I’ll be ready,” Garcia concluded.

Who do you think will win at UFC 274, Fernie Garcia or Journey Newson?