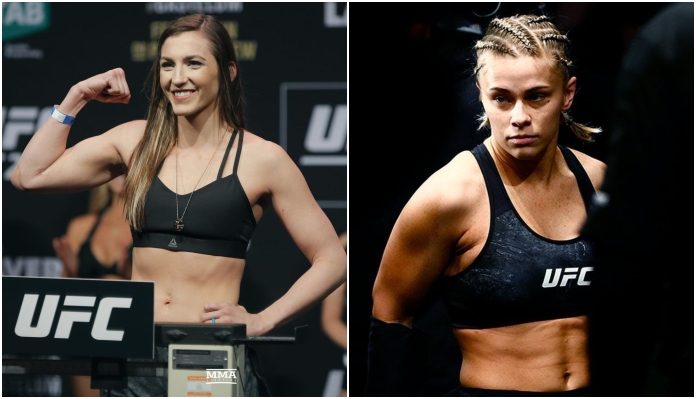 Reports came out today that Paige VanZant’s initial opponent at UFC 236 in Poliana Botelho was injured and off the card. Replacing her would be Montana De La Rosa who is fresh off of yet another submission win at UFC 234. However, De La Rosa has now confirmed that the fight is not happening and those reports are false.

“I guess [UFC matchmaker] Mick [Maynard] wanted to make that fight between me and Paige,” De La Rosa told to BJPENN.com. “But now Paige is claiming her arm is hurt so she can’t fight that Poliana girl or me so we aren’t sure what is happening. As of now, she is hurt so that is not true. I’m just waiting to hear. They do want to make that fight with Paige and I but she is claiming she is hurt. I’m not really sure what is going on now.”

According to De La Rosa, VanZant told the UFC she is injured and can’t fight at UFC 236. That has left De La Rosa wondering what is next for her, or if VanZant even wants to fight her.

“I hope it still happens,” De La Rosa said. “Hopefully, whatever she is dealing with she gets over. I hope it isn’t that she just doesn’t want to fight me. They can either give me an opponent or tell her to go ahead and fight me.”

If the fight against VanZant doesn’t happen as she is saying, De La Rosa is hoping to get back in there soon. UFC 236 is the perfect date for her to return and wants to fight again.

However, for Montana De La Rosa, it is unfortunate her next fight will not be against VanZant. De La Rosa believes she would have won that fight rather easily and that it would be a perfect fight for her.

“It would have been one of those fights where I would have been able to showcase my ground and my standup,” De La Rosa said. “Of course, I believe I will dominate her but it will be a good exciting favorable matchup for me.”

For now, it is a waiting game for De La Rosa to see when she fights next and who it ends up being. What we know for sure is that it will not be against Paige VanZant at UFC 236 on April 13.