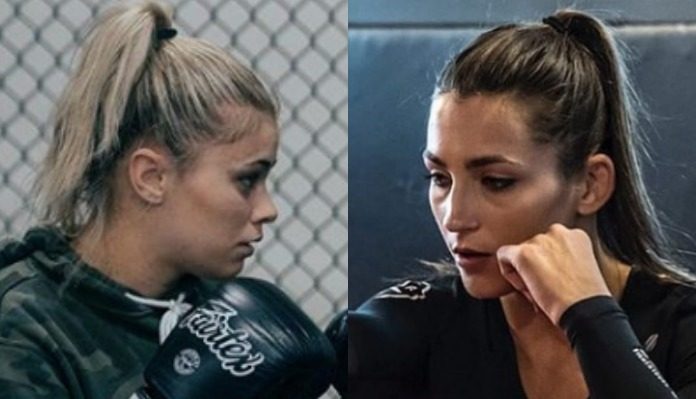 After taking home a $50,000 bonus for beating Nadia Kassem at UFC 234, flyweight contender Montana De La Rosa has her sights on her next big payday: a matchup with Paige VanZant.

The 23-year-old expressed interest in the fight following her victory and UFC President Dana White warmed up to the idea as well.

Montana De La Rosa (10-4) picked up a dominant win over previously undefeated Kassem at UFC 234, submitting the Australian fighter in the second round. The Texas native has now won four-straight fights, with all of those victories coming by way of stoppage. The victory also elevated her UFC record to a perfect 3-0. The Ultimate Fighter Season 26 member last official loss was a Jan. 2017 setback to Cynthia Calvillo at LFA 1 when she competed in the strawweight division. She also lost to former UFC flyweight champion Nicco Montano on TUF 26 in an exhibition bout. De La Rosa has won eight of her 10-career fights by stoppage.

Paige VanZant (8-4) earned her first win in the flyweight division last month when she submitted Rachael Ostovich at UFC on ESPN+1. The win snapped her two-fight losing streak and it was her first victory by submission since Sept. 2015. The 24-year-old missed all of 2017 due to a back injury and only competed once in 2018. Prior to her victory at UFC Brooklyn, VanZant suffered back-to-back losses against Michelle Waterson and Jessica Rose-Clark. Should she compete again in 2019, it would be the first time since 2016 that she fought more than once in a calendar year.

These two women share a common opponent in Rachael Ostovich. VanZant submitted Ostovich in the second round, De La Rosa in the third round at The Ultimate Fighter 27 Finale in July 2018. These two have a combined 11-career submission wins through 26-career fights.

Would you like to see Montana De La Rosa vs. Paige VanZant next?