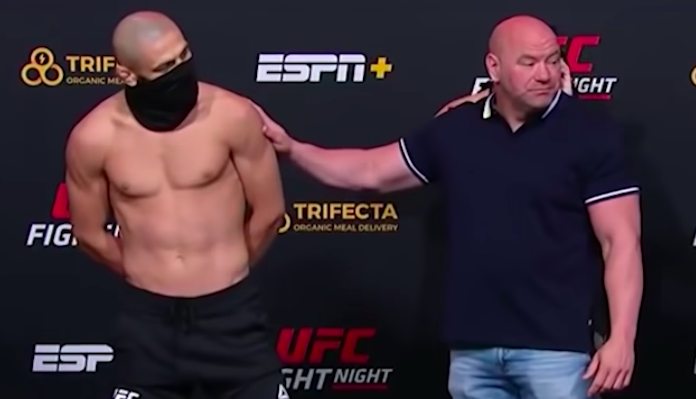 UFC president Dana White has confirmed that emerging star Khamzat Chimaev will fight a ranked opponent in a UFC main event his next time out.

Chimaev is one of the UFC’s up-and-coming superstars. The 26-year-old Swede made his UFC debut back in July on Fight Island and made history by picking up two victories in a 10-day span, over John Phillips and Rhys McKee. The hype train was already surging at that point, but a 17-second KO win over Gerald Meerschaert at UFC Vegas 11 has shot him into the ranks of the most-talked-about fighters in the sport.

After KOing Meerschaert, White has admitted the UFC already has a welterweight fight for Chimaev lined up against veteran Demian Maia. But after beating Meerschaert, it’s possible Chimaev fights someone even higher ranked. At this point, all options are on the table for him. But one thing we do know is Chimaev will get a big step up next.

As relayed by reporter Helen Yee, White confirmed on Thursday at a press conference on Fight Island that Chimaev’s next fight will be the main event against a ranked fighter. This confirms what the fighter himself was recently claiming on his Twitter.

Let the speculation begin as to who Chimaev will fight next. The truth is, all options are on the table for this man at either welterweight or middleweight. Chimaev’s ability to go between weight classes and fight frequently is quickly endearing him to White and the UFC. It makes the possibilities as to who his next opponent could be endless.

In my opinion, the promotion’s matchmakers will most likely target Chimaev to fight against someone in the bottom half of the top-15. For example, at welterweight either the UFC gets the Maia fight done but if not, maybe No. 10 Neil Magny would be a good opponent. At middleweight, maybe someone like No. 12 Brad Tavares makes sense. Then again, maybe the UFC goes all out and matches him up with a top-five guy.

Who do you think Khamzat Chimaev should fight next?