Home » MMA News » UFC » Dana White confirms he will be working with Floyd ... 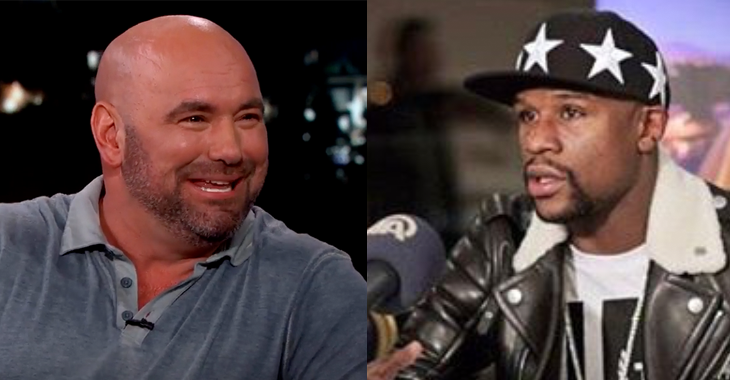 Dana White has confirmed speculation that a deal is in the works with Floyd Mayweather.

Last month, rumours surfaced that the retired boxer would be making a cross-over into MMA. The undefeated 42-year old experienced an MMA clash first hand when he faced the UFC former two-division champion, Conor McGregor in a boxing bout. Mayweather won the 2017 bout by TKO and hasn’t fought since. However, last month he revealed that he has two fights planned for 2020 including a UFC cross-over bout. Rumours were bolstered as photos showed Mayweather sitting at a Basketball game accompanied by Dana White.

The professional boxer and promoter recently said: “Dana White and I are working together again to bring the world another spectacular event in 2020.”

Today, the UFC kingpin told Jim Rome that a deal is in place with the boxing superstar. If things play out as planned, White will sit down with Al Haymon (Floyd Mayweather’s manager) in March and get a deal on paper. White said (transcript via MMA weekly):

“It’s true. We sat at the Clippers game. We started talking and we literally got a deal done right there on the court. And if things play out the way things Floyd and I think they will, I will probably sit down with Al Haymon [Mayweather’s manager] in March and get a deal on paper.

“If everything goes our way, Floyd and I would be doing something in October or November [of 2020].”

Dana White has shared his criticisms in the past off cross-over bouts and promotions. Recently he advised Tyson Fury to stay in his boxing lane, instead of transitioning to MMA. However, it seems White has had a change of heart as he fully intends on involving himself in both boxing and MMA promotion.

No details of the Floyd Mayweather deal or negotiations have been released, but stay tuned on BJPenn.com for all future announcements.