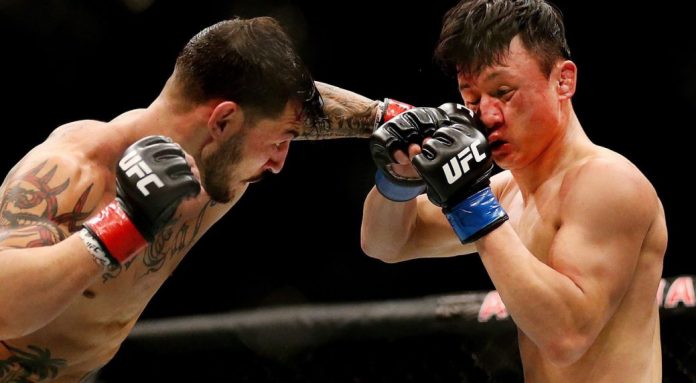 Speaking to reporters backstage following UFC Tampa, Swanson was asked if he would be interested in a rematch against “The Korean Superboy.” The two fought back in December 2016 at UFC 206 in an incredible fight that won many accolades including “Fight of the Night” and the 2016 “Fight of the Year.” Swanson believes fans would love to see a rematch between the two, and he’s open to running it back.

“I’m definitely (interested in a rematch). I feel like me and him owe the fans that, to do it again,” Swanson said. “I would like to see him get a win, he hasn’t really been that active. But for us to do that again, I think people would love that. I’m down.”

There are rumors Choi may delay his mandatory military service in his native South Korea to return to the Octagon later this year the the UFC visits his home country. Choi hasn’t fought since January 2018, when he suffered a knockout loss against Jeremy Stephens. His fight before that was against Swanson in 2016, so overall he has just one fight in the last three years. However, fans haven’t forgotten how exciting he is to watch.

With Swanson finally snapping his nasty four-fight losing skid that had him on the brink of potentially being released by the UFC, you’d think he would be pushing for a fighter coming off of a win in his next fight so that he can continue to push towards his first UFC title shot. But Swanson is a fighter who is all about giving the fans what they want, and if the fans want him to run it back with Choi, then that’s the fight he’ll give them.

Would you like to see a rematch between Cub Swanson and Doo Ho Choi?