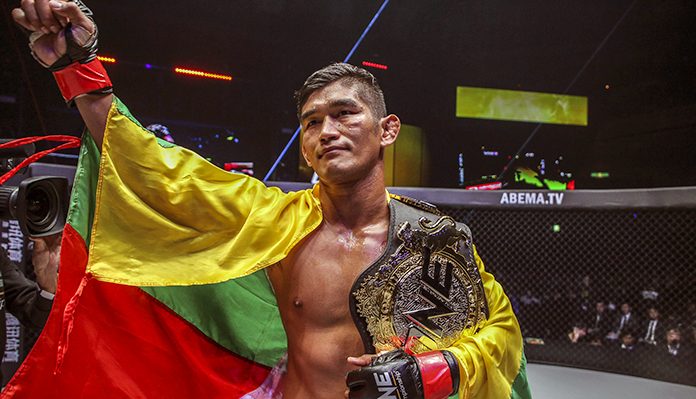 The main event of Sunday’s ONE: Century card was big — both in terms of the size of the competitors and the scale of the fight. The matchup saw ONE light heavyweight champ Aung La N Sang, who also owns the promotion’s middleweight belt, attempt to thwart the challenge of heavyweight champ Brandon Vera.

The result was an absolutely thrilling contest.

Round one saw the two champions feel each other out, mixing in the occasional power shot.

Round two saw all hell break loose, as the pair pelted each other with a dazzling breadth of offense — punches, kicks, elbows, knees, all with fight-ending intention. While both men had some major success in these frenetic exchanges, it was ultimately Aung La N Sang who found victory, smashing his foe with a hellacious barrage of punches.

He continues to show why he reigns supreme!

Big round of applause to Brandon Vera, he is a TRUE WARRIOR!#ONECentury pic.twitter.com/hI79vWp4KG

In victory, Aung La N Sang made his first successful defense of the light heavyweight title. He’s now on a seven-fight win-streak, and has tasted defeat just once in ONE Championship — a loss he avenged.

Vera, meanwhile, loses for the first time in ONE Championship, and fails to realize his long-time dream of becoming a two-division champion.

What did you think of this incredible war in Tokyo?