Bisping (30-9 MMA), a former middleweight champion turned UFC commentator, recently weighed in on the ongoing feud between ‘Notorious’ and Daniel Cormier. ‘The Count’ suggested that McGregor should watch his mouth as ‘DC’ would pull him “limb from limb” in a real fight.

Those comments clearly did not sit well with Conor McGregor who proceeded to trash Michael Bisping with the following remarks on social media.

“Bisping is a nobody on Sirius XM,” McGregor Tweeted. “Rushed back to competition after being dropped/strangled and then gets shotgun slept by Gastelum’s left hand. Devastating. Even though I collect commission on all his fights, I still said to the team to pull the Gast fight. I knew it was coming. But hey, 100k! 50k off the top of each fight. I used to say ‘yoink’ every time it hit the account.” 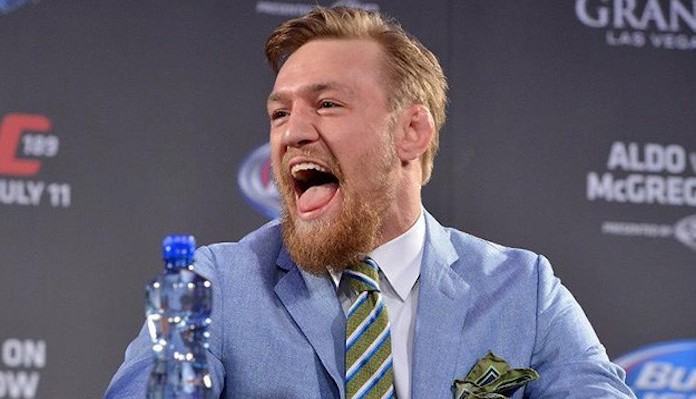 Michael Bisping responded to McGregor’s claims during his most recent episode of the ‘Believe You Me’ podcast with the following remarks.

“No you don’t. You’ve never collected a penny of commission off me, mate. I’m not going into details but that’s just that. This was going to be my response. I don’t know what is getting deleted quicker, Conor’s tweet or his legacy, because they’re both disappearing down the f*cking pipe. I’m not going to do that. You know, I’m not going to get into it publicly on social media, like I’m fucking arguing with some 13-year-old kids on Call of Duty.”

Michael Bisping’s comments regarding Conor McGregor’s legacy clearly did not fall on deaf ears. The Irishman recently took to Twitter with the following photo and caption.

The only legacy I give a fuck about is the Legacy 5000 my mother flies around on. pic.twitter.com/31SL1CiLDY

“The only legacy I give a f*ck about is the Legacy 5000 my mother flies around on.” – McGregor captioned a photo of Bisping on an commercial airplane.

What do you think of the latest trash talk between former UFC champions Conor McGregor and Michael Bisping?

This article appeared first on BJPENN.COM
Previous articleCat Zingano suing Halle Berry after being snubbed of promised role in her new movie “Bruised”
Next articleMichael Bisping fires back at “little guy” Conor McGregor: “Even if you stood on your wallet I’d still be a bigger man than you”
© Newspaper WordPress Theme by TagDiv