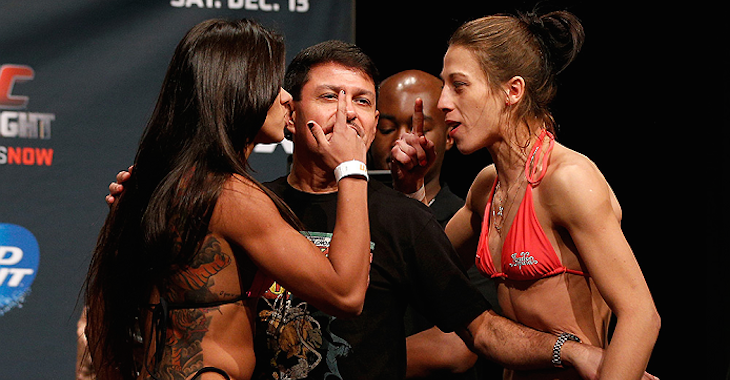 Former UFC strawweight Claudia Gadelha would like a trilogy match with Joanna Jedrzejczyk. However, she doesn’t want it in the cage.

The two strawweights have clashed on two occasions already, in 2014 and 2016. Both of the bouts were won by Jedrzejczyk by decision. However, both bouts were quite close, with their 2014 fight ending in a split decision. Meanwhile, their follow-up bout was one of the best of the year.

However, it’s been six years since their last fight, and a lot has changed. Most notably, Gadelha decided to retire from MMA last year. Citing injuries and concussion issues, she decided to hang up the gloves.

For her part, Jedrzejczyk is still competing. The former UFC strawweight champion is set to face Weili Zhang next month at UFC 275. With a win, she hopes to challenge for the title that she used to possess.

Despite being in retirement, Claudia Gadelha would like to face Joanna Jedrzejczyk one more time. On the Trocação Franca podcast, the Brazilian noted that she would like the chance to face her rival for the third time.

However, not in the cage, but on the mats. Gadelha opined that it’s likely that her challenge to Jedrzejczyk will go unanswered. That being said, she would relish the opportunity to face the former champion again.

“I’d really have liked to do a third fight with Joanna. A lot. A lot,” she said. “I think those two fights were really close, and I would’ve loved to have fought her a third time. I don’t regret not doing it. But it would make me happy if it happens in jiu-jitsu… [However], I don’t think she’d agree to it. It will just linger in the air, really.” (h/t MMAFighting)

What do you think about Claudia Gadelha’s comments? Do you want to see her face Joanna Jedrzejczyk again?