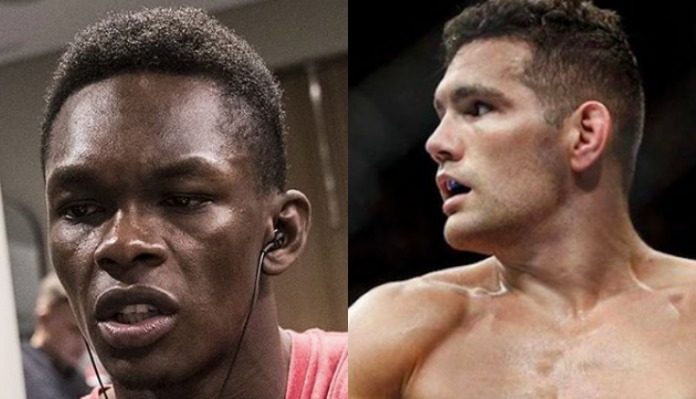 Chris Weidman took another shot at Israel Adesanya, suggesting the UFC middleweight champion is just another Anderson Silva without the black belt.

Weidman, the former UFC middleweight champion, joined the long list of fighters to take a shot at Adesanya in the wake of his stunning TKO win over Paulo Costa at UFC 253. Weidman recently said that he believes he would “ragdoll” Adesanya with his wrestling if they fight and he also said he believes Adesanya is a “tailor-made matchup” for him.

On Friday night, Weidman continued to go after the champ. In a new message posted on his Twitter, Weidman said that a fight against Adesanya would be “easy money” for him.

Heyyy I just realized I have 2 common opponents with Adesanya…Gastelum who I finished. Then Silva who I finished twice. Adesanya squeaked by decisions on both of those guys.. Adesanya is just another Silva without the black belt in Jitsu. Easy money

Weidman is right to point out that he did finish Gastelum and Silva twice, and Adesanya wasn’t able to finish those guys. But at the same time, we all know that MMA math doesn’t necessarily work. Just because Weidman was able to finish Gastelum and Silva and Adesanya wasn’t doesn’t mean that Weidman would have the upper hand if he fought Adesanya. It’s quite the opposite as Adesanya would no doubt be a big favorite there.

At the same time, Weidman is right to point out that Adesanya’s grappling needs to be tested by his opponents. When his fights are on the feet he will always have the advantage, so the way to beating him is likely to take him down and hold him there. Weidman is an incredible wrestler and stylistically he does present some problems for Adesanya. But then again, you just can’t bet against Adesanya at this point in his career.

Do you agree with what Chris Weidman says about Israel Adesanya?