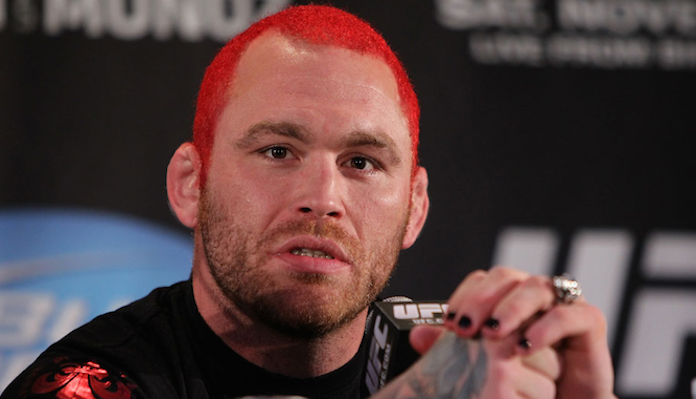 Former UFC middleweight contender Chris Leben, a veteran of the debut season of The Ultimate Fighter, has announced his retirement.

“The Crippler” who most recently competed in bare-knuckle fighting, made his announcement in a video posted to his official YouTube channel earlier this week.

“I just wanted to put out this short video and make this official,” Chris Leben began. “Everybody knows I’ve been competing in bare-knuckle, and I think it’s time to retire.

“Couple reasons why,” Leben continued. “Dave Feldman and the BKFC have been wonderful to me. It has nothing to do with that all. It has to do the fact that, first and foremost, I’m an amateur ref here in California. I’m aspiring to go pro, I want to do that, and I feel like it’s a conflict of interest being both a referee and an athlete at the same time. I want to focus on my career as a referee. Also, I want to focus on my career as a coach, as an elite-level coach. I coach jiu jitsu, I coach boxing, I coach MMA. When I’m training, I don’t have the time to put the energy into my athletes.

Leben continued, explaining that he’s also been missing jiu jitsu, and his hoping to free up more time to study the gentle art and get back to competing.

“I miss jiu jitsu,” said Leben, who holds a BJJ black belt. “Because I’ve been training for these boxing matches, I haven’t even had the opportunity to compete in jiu jitsu the way that I want. I’ve done one Fight 2 Win [event], but since then, I haven’t been able to compete in the last year and half in jiu jitsu. I want to focus on that.

“I know I’m 40 now, but still, I think I have some time, and jiu jitsu doesn’t damage my body the way fighting does.”

While a desire to focus on refereeing, coaching, his family, and BJJ all contributed to his decision to retire, Chris Leben says his decision also comes down to the way the last few years of his combat sports career unfolded.

In his final UFC fight, Leben failed to answer the bell for the third round of a fight with Uriah Hall. As a fighter who’s always been known for his grit and heart, he admits he’s tremendously disappointed in himself for that failure.

“Here’s the biggest thing that I wanted to talk about,” Leben explained. “My UFC career did not finish the way I wanted it to. I don’t think most people’s do, but I ended up going through a ton of struggles, both in and out of the cage, battling with addiction, battling with alcoholism. Ultimately when I came here to The Arena, I got on that path to recovery. Most people that follow me know I just got my two-year coin. So I’ve been 100 percent sober for two years now. The battle’s been much longer than that. It’s been four years that I’ve really worked at it. I’ve had two slips on alcohol in the last four years, but the last two years, I’ve abstained from any and everything, and God willing, it’s going to be that way that way the rest of my life.

“For a guy that’s known for putting his heart in the cage, for a guy who would go out there and die before he gave up in a fight, I finished my UFC career on the stool,” Leben continued. “Now if you don’t know what that means, that means I didn’t answer the bell for the third [round]. The referee didn’t count me out. There was no TKO or submission. I just didn’t answer the bell for the third round. That’s because my heart wasn’t in it. That was devastating to me. It was crippling for me to finish my career that way.”

Leben then signed a deal with Bellator, but was deemed unfit to compete due to the state of his heart, which had been pummeled to near-destruction by a life of fighting and substance abuse. Doctors initially told Leben he needed a heart transplant, or at least a pacemaker, but after several years and a litany of lifestyle changes, his heart recovered, and he was deemed fighting fit once again.

“I tried to go back and fight for Bellator, I got a contract,” Leben explained. “I failed my pre-fight medicals. It turns out my heart was completely shot. Obviously, they said, from the excessive training and the excessive alcohol. By changing literally everything in my life, abstaining from drugs and alcohol, changing my diet, changing how I manage stress and anxiety, changing where I live, changing who I surround myself with, slowly but surely, my heart improved. Little by little. First they said I needed a new heart. Then they told me I didn’t need a new heart, I just needed a pace-maker. Of course I couldn’t train anymore if I got that, so I didn’t get it. I kept going back to the cardiologist, and she kept saying ‘it’s a miracle, I can’t believe you just keep getting better.’ Turns out the human body is pretty crazy. If you stand back and give it a chance to heal, it will.

“My body healed to the point that my cardiologist one day said ‘you’re good. You’re like normal now.’ I said well ‘does that mean I can fight?’ She goes ‘yeah, I would sign off on you fighting.’ That’s about the time I got the call about bare-knuckle.”

While that fight with Cochrane didn’t go his way, Leben gave it his all for five, frenetic rounds. He views that performance as a far more fitting end to his career than his final UFC fight.

“My third and final [bare-knuckle] fight, I fought Dakota Cochrane,” Leben said. “Tough guy, tough fight. There were some things leading up to the fight that didn’t work out in my favor. That doesn’t matter. Here’s what matters. I went out there and I fought five rounds. At the end of the fight, I had 36 stitches in my face. The side of my nose was ripped off. I had a broken orbital. But I answered every bell, and I finished that fight on my feet.

“What matters is, I didn’t finish my carer on the stool,” Leben stated. “So, reflecting on it and thinking about, to be able to come back to combat sports after a lifetime of combat sports, to be able to come back, have those three fights, have that last fight be a knock-down, drag-out war, and finish it in traditional ‘Crippler’ fashion… I feel like I accomplished what I set out to accomplish.”

Congratulations to Chris Leben on an incredible combat sports career.