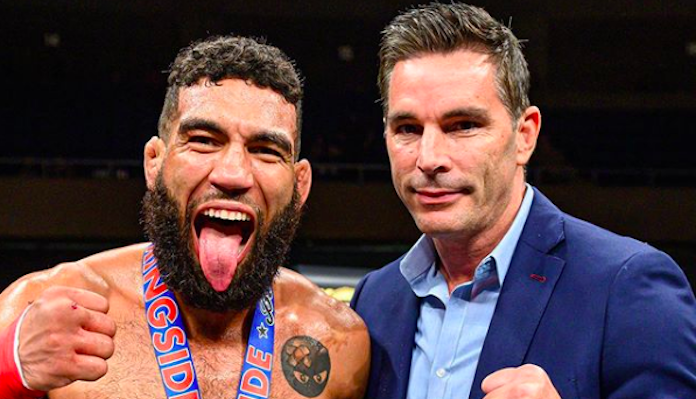 Bare Knuckle Fighting Championship (BKFC) is one of countless sports organizations to be adversely affected by the coronavirus pandemic that is currently sweeping the planet, having already been forced to postpone two events.

Suffice it to say that it’s been a hectic few weeks for company president David Feldman, who is doing his best to guide the organization through these times of danger and uncertainty.

“Everyday you hear something new,” Feldman told BJPENN.com on Friday, weighing in on the state of things. “I think the biggest thing is just not knowing [what’s going to happen].”

As the pandemic has tightened its grip on the planet over the last week, Feldman was first forced to move the BKFC 11 card, originally on the calendar for March 14, to June 20. Not long thereafter, he also pushed back the BKFC 12 card, which was originally scheduled for April 11, but hasn’t locked down a new date for the event yet.

He’s already compensated the fighters who were scheduled to fight last weekend, and intends to keep taking care of the BKFC roster as best as he can, but admits there’s a real cost to expending resources without putting on events.

“They didn’t get 100% compensation, but they did get compensated,” Feldman said of the fighters who were scheduled to fight on the March 14 card. “They were all very, very thankful for what we gave them. On social media, they all posted how we’re a great company and we really take care of our fighters. We took care of some of our staff too. We did what we could do. It was a big hit for us cause we had nothing coming in. We took a hit, but I think we earned the respect of a lot of our staff and our fighters for the way we handled that event.

“We’re trying to figure out a way to take care of some of these fighters that were on the postponed April event and possibly the May event,” the BKFC boss added. “We’re just figuring things out. We’re just like the rest of the country—really, the rest of the world—right now. We’re figuring this out every day as we get more news. But we’re trying to handle the situation in the most professional way that we can.”

With no events on the calendar for at least a few months, Feldman now finds himself on unfamiliar terrain. He’s a fight promoter with no fights to promote.

Of course, that doesn’t mean the works stops.

Despite what is by all accounts a complete shut-down of the sports industry, Feldman and his team are working hard to develop new content that will both keep BKFC at the forefront of fight fans’ minds and keep those fans entertained during these trying times.

“We’re trying to figure out different ways of creating content right now,” he said of BKFC’s operations. “Getting in contact with the fighters, interviewing the fighters. I’m going to get a little more involved right now myself, getting out there a little bit and just doing everything that we can do to keep the fans engaged.

Needless to say, Feldman and the BKFC team are working hard to adapt to the current reality. Of course, much of the current strategy depends on business resuming as usual in the fairly near future.

Feldman acknowledges there’s no guarantee of that happening.

“It really just depends on how long [this lasts],” he said. “I don’t think we can really put a finger on the pulse of that yet because we don’t know how long it’s going to be. If three weeks comes and they say, ‘all right, we’re not in this lockdown anymore,’ and we can start to get on with our own lives, it’s definitely gonna have an impact on [business] but it’s not going to have an exponential impact on us. If this thing goes on—some people are saying possibly six months—you know, it’s gonna have a big impact on a lot of us.”

While this pandemic has paused what’s been a rapid rise to prominence for BKFC, Feldman is happy with the progress the company has made up to this point.

“We’re definitely satisfied as far as the popularity goes and how much we got out there,” Feldman said, looking back on BKFC’s first two years. “We essentially created a brand new combat sport and our company name is pretty much as synonymous with the sport as UFC is with MMA right now.

“We’re extremely satisfied with how far this went in the initial period of time and how much notoriety that we gained so far,” he added. “It’s great and I take my hat off to the fighters for fighting the way they fought to get us to where we are right now.”

The BKFC boss is optimistic that, provided this crisis subsides in a timely way, the promotion will get right back on track and the growth will continue. There are already big things on the table: major television deals, bigger venues, new free agent signings, and more.

“We will be back, and I think we’ll be that stronger than we ever were.”