Charles Oliveira has had his say on the winner of Alexander Volkanovski and Islam Makhachev.

In what is one of the most eagerly-anticipated matches of 2023, The Australian will welcome the lightweight champion to Perth at UFC 284. ‘The Great’ will be competing at 155lb for the first time in his UFC career despite having fought as heavy as welterweight early in his career.

Oliveira is a former featherweight himself and is the owner of most finishes in UFC history with 19. The Brazilian racked up 11 straight wins at lightweight including winning the belt in 2021. ‘Do Bronx’s’ incredible run came to an end when he was submitted by Makhachev at UFC 280. In a recent interview with Super Lutas, Oliveira said,

“They are two great fighters. Alex is a fighter that defends takedowns well. He hits and kicks very hard,” explained the former champ. “On the other side, Islam has very good takedowns. When he gets you down, he puts on the pressure,’ Oliveira continued. “I think Islam wins….But if Volkanovski defends the takedowns in the first round and connects with the hands….[shakes head in approval that Volkanovski has a chance],” added the Sao Paulo-native..

With emphatic finishes against a ‘who’s who’ at 155lb, Oliveira established himself as one of the best to ever do it in his weight class. However, Makhachev was different class on the night, and won by arm-triangle choke in the second round. 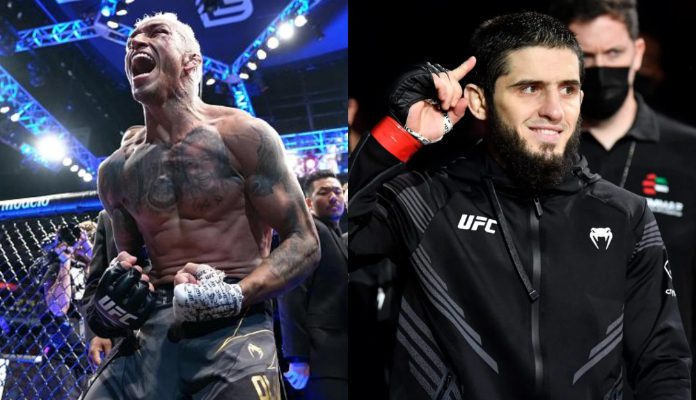 “Against Makhachev, I didn’t feel any pressure… He was just better than me,” said Oliveira. “I haven’t watched that fight back yet. It doesn’t make any difference to me. It wasn’t a bad night… just 15 bad minutes… 10 to 20 bad minutes,” Charles Oliveira explained, “There’s nothing else to say. You know I always tell the truth. I already thought about it, but there’s no real explanation,” added the 33-year-old.

Oliveira remains the no-1 contender in the lightweight division. No matter the outcome in Perth, the 5’10 star has a strong chance of facing the winner. If he gets another crack at Makhachev, Oliveira says he would approach the fight the same as before.

Who’s your pick for Makhachev vs Volkanovski?