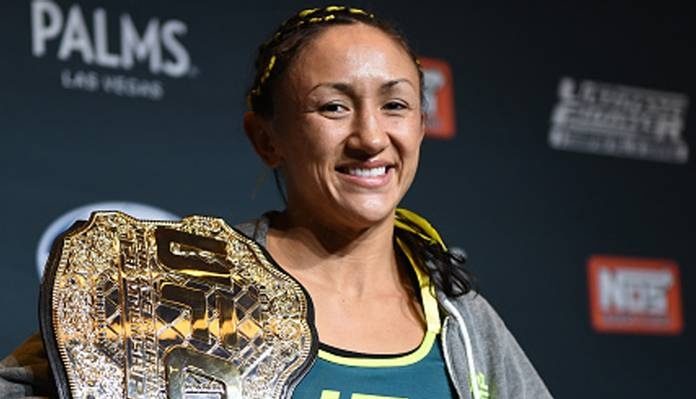 UFC strawweight champion Carla Esparza will be in the octagon by the end of the year.

‘Cookie Monster’ faced off against Rose Namajunas at UFC 274 in May. It was a rematch of their showdown in December 2014, where Esparza won via submission. At UFC 274, the latter moved to 2-0 in the series, as she defeated ‘Thug Rose’ by a split decision.

In addition to picking up her second victory over Namajunas, Esparza also secured the UFC strawweight title for the second time in her career. While she earned the victory, the fight has also been criticized as one of the worst in promotion history.

Following the victory, the strawweight champion stated she would need time off due to injury. Esparza also declined an October date with top contender Weili Zhang. That decline saw Mackenzie Dern offer to fight ‘Magnum’ for an interim title on that date.

It seems any type of interim title is now off the table, as Carla Esparza has given an injury update. The 34-year-old stated that she will not require surgery on social media. With that noted, she also confirmed that she will return to the cage by the end of the year.

Health update: I just saw my doc in regards to my 2 MRI results yesterday, and the great news is, no surgeries required on either location👏🏽! A little more time to heal, PRP injections(already scheduled), and a little physical therapy and I should be back 💯 (full response on IG) pic.twitter.com/c5kjYOMWuK

“Health update: I just saw my doctor in regards to my 2 MRI results yesterday, and the great news is, no surgeries required on either location. I simply require a little more time to heal, PRP injections (already scheduled), and a little physical therapy and I should be back to 100 percent to start camp and fight before this year is done.”

Carla Esparza continued, “I have a very tough fight and camp ahead of me, and I look forward to giving it my all. In the meantime, look forward to some modified training. Thank you to the UFC for being on top of it, and making sure I get back to [100 percent].”

Who do you want to see Carla Esparza fight next? Sound off in the comment section below!