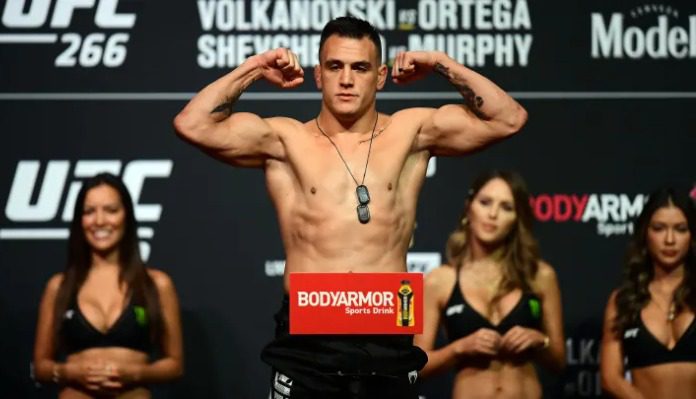 Cody Brundage is looking to extend his win streak to two when he faces Tresean Gore at UFC Vegas 58.

Gore was supposed to face Josh Fremd who is Brundage’s teammate, but Fremd got hurt and was forced out of the bout. Once that happened, Brundage offered to step up and the promotion quickly made the fight.

“When Josh got hurt, we talked about it and I liked the matchup,” Brundage said on Just Scrap Radio on BJPENN.com. “We are teammates so I knew it was a possibility as soon as we knew he was hurt and wouldn’t be back in time. The plan right away was to see if I could slide into that spot and it just worked out. I knew like eight weeks out so it was a full camp for me.”

When Brundage knew Fremd was off for good, he pushed for the fight as he thinks this is a good matchup for him as he doesn’t think Gore is as good as many think.

“I think Tresean is good, but I think he is a regional level fighter if I’m being honest,” Brundage said. “He hasn’t fought anyone other than Bryan (Battle) that is a very high caliber. That is not a knock on them as me and Tresean and all those guys on TUF are at the same point of our career in terms of experience… The best guy he has fought is Bryan Battle and me and Bryan fought as amateurs so I’m taking his toughest fight as an amateur. I have a lot of confidence in that.”

Why Cody Brundage is confident is due to the fact he thinks Tresean Gore won’t be able to match his cardio. Brundage believes he has some of the best cardio in the division and plans to test Gore’s on Saturday.

“I think he’s terrified of getting tired and that’s why he’s low volume. I think that is who he is as a fighter and I don’t think he can change it,” Brundage said. “The reason he does is, that he has fallen in love with his power, and also if he tried to turn up the volume and got into the grappling exchanges I don’t think he has the cardio for it. But, we will see because I know I will bring the grappling and pressure.”

Brundage believes the first round will be the toughest – similar to his last fight – but he is confident he will eventually get the second or third round stoppage.

“I’m going to come out and push the pace and make him feel my pressure. I’m going to be mixing up the striking with the wrestling and we will see,” Brundage said. “I have full confidence that I have the cardio to go 15 hard minutes and I don’t think he does… I see myself finding a second-round finish or third, I do think his frustration will be tough.”

Do you think Cody Brundage will beat Tresean Gore at UFC Vegas 58?