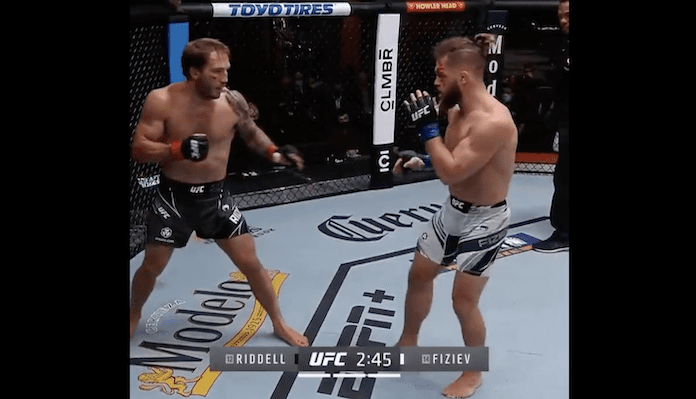 Riddell was knocked out in the third round with a spinning wheel kick by Fiziev in the co-main event of Saturday’s UFC Vegas 44 card. For Riddell, it was his first loss in the Octagon after winning his first four fights in the promotion. To make matters worse, he suffered the first knockout loss of his MMA career, to boot. The only thing that takes the sting away is that he at least lost to someone who he considers to be very close friends in Fiziev.

Both Riddell and Fiziev did not want to fight each other prior to this fight, but with both men ranked in the top-15 at 155lbs, the UFC told them that they had to fight. It turned out to be a great matchup between two men who highly respect each other, but who also know that they have to put food on the table for their own families. In the end, it was Fiziev who got the wheel via TKO, but there are no hard feelings from the side of “Quake” Riddell.

Taking to his social media following UFC Vegas 44, Riddell praised Fiziev for putting on a “beautiful fight” against him. Take a look at the message that “Quake” shared below.

Brad Riddell just shared this on Instagram telling Rafael Fiziev “I had fun in there with you” pic.twitter.com/zqI5c7aXl2

“I’m ok. Congratulations to Rafael Fiziev. Beautiful fight my bro. I had fun in there with you,” Riddell said.

While Riddell moved to 4-1 overall in the UFC, Fiziev improved to 5-1. He figures to get a top-10 opponent in his next fight, and you know his friend Riddell will be cheering him on.

What do you think is next up for Brad Riddell following his spinning wheel kick TKO loss to Rafael Fiziev at UFC Vegas 44?