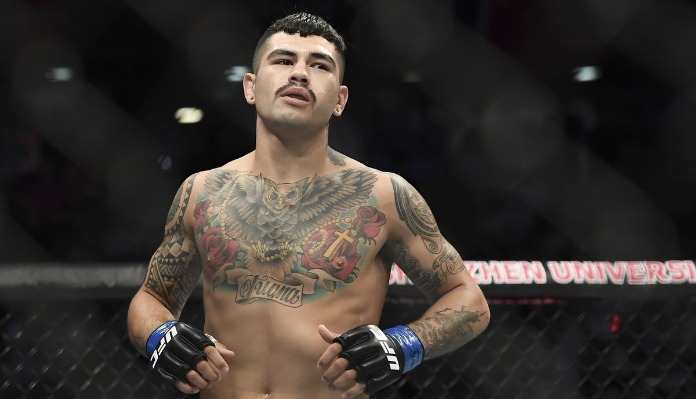 UFC middleweight Anthony Hernandez reacted to his upset win over Rodolfo Vieira at UFC 258, saying “I love to beat people at their own game.”

Hernandez picked up an amazing second-round guillotine choke win over Vieira in a massive upset on the UFC 258 undercard. In a back-and-forth fight between two talented grapplers, Hernandez was able to outlast Vieira, drag him into deep waters, and drown him in them. Vieira started off strong and had full mount a minute into the fight, but Hernandez showed incredible submission defense and was able to will his way out of it. He then picked apart a gassed-out Vieira on the feet before getting him to the ground and submitting him with a guillotine.

Though Vieira may be a world-renowned BJJ player, this is MMA, and Hernandez showed the Brazilian that you need more than just one skill to make it far in the UFC. Speaking to the media following his incredible win, Hernandez bragged that he was able to submit such a highly-decorated grappler. You can tell that “Fluffy” had a chip on his shoulder as he was able to prove the doubters wrong.

"Just because he’s 7-0 doesn’t mean he’s unbeatable. I wanted to be the one to prove he’s f***ing beatable."

Anthony Hernandez (@Ilovebamf) made a statement by handing Rodolfo Vieira his first loss at #UFC258.

“I’m not afraid to fight anybody. At the end of the day, I know my coaches and my team will get me prepared, and that’s plain and simple. I got into this sport because I knew I could be the best and just because he’s 7-0 doesn’t mean he’s unbeatable. I wanted to be the first one to prove that he’s f*cking beatable. And I submitted him and that’s his sh*t, so let’s go,” Hernandez said.

“I love to beat people at their own game. Because it’s just like what did you beat me at? Because if you beat them at their best, then they have no excuse. I wanted to give him no excuses.”

Hernandez looked amazing in this fight and it could be the type of victory he needs to really make a name for himself in the UFC. So far, he is 3-2 overall in the Octagon with a mixed bag of performances. If he looks as sharp as he did in this fight, then he could go far in the UFC middleweight division. Following this bonus-winning fight, it’s possible the matchmakers could give him a step up to a top-15 opponent, considering Vieira likely would have had he won the fight.

What do you think is next for Anthony Hernandez after his upset win over Rodolfo Vieira at UFC 258?