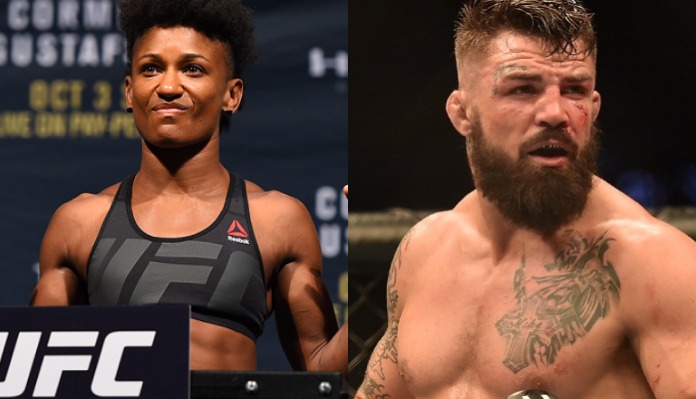 Angela Hill is one of many fighters who have taken offense to Mike Perry using the N-word on Twitter.

In a recent beef with Michael Jai White, the two went back-and-forth on social media where Perry asked to fight White in bare knuckle. Yet, the actor had a snarky response and “Platnium” obviously didn’t like it as he issued a racial slur at the actor.

“Blood and bone more like b***h a*s n**** @MichaelJaiWhite,” Mike Perry wrote. He then followed it up with another tweet that read “You have to make a big deal out of this. A white man said that to you because you straight up being one. Y’all can’t act like you don’t hear me. It was bull s**t he was trying to slander a real gangsta so people would think he more than an actor. For #FLA we say #FOH.”

The tweets were not well received from UFC strawweight, Angela Hill who slammed Mike Perry for using a racial slur.

White people using ‘nigga’ to insult a black person, I don’t give a fuck what your intentions were, it ain’t right. The few times I’ve run into Perry during fights he’s seemed cool, this isn’t cool. https://t.co/4PnQ5vHKVl

“White people using ‘n***a’ to insut a black person, I don’t give a f**k what your intentions were, it ain’t right. The few times I’ve run into Perry during fights he’s seemed cool, this isn’t cool,” Angela Hill responded.

This is not the first time Mike Perry has used the N-word and faced backlash from it. In 2018 he said it to Tyron Woodley and claimed it was okay because he is two percent African. That was met with more backlash from fans and fighters like Aljamain Sterling. Who, like Angela Hill, took to social media to address the UFC fighter.

Currently, Mike Perry has yet to respond to Hill and whether or not the UFC will do anything about Platnium using racial slurs is to be seen.

What do you make of Mike Perry using a racial slur online and Angela Hill’s response to him?