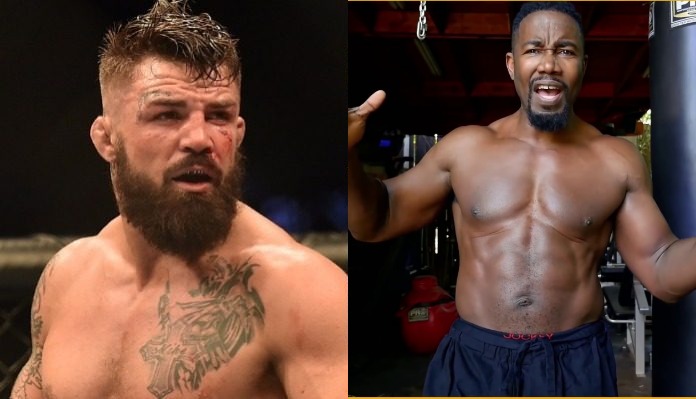 “Platinum” Mike Perry has never been afraid to swap trash talk with his UFC rivals, but his latest target came as a bit of a surprise. Last week, the UFC welterweight took a shot at Hollywood action star Michael Jai White for allegedly disrespecting the late, great Kimbo Slice.

And now, White has responded.

This bizarre saga began when Perry caught wind of some comments from White that he deemed disrespectful of Kimbo Slice.

”I told Kimbo I’d teach him some pointers, the same way I’ve done with a lot of champions in the past,” White said in a video posted to his YouTube channel (via MMA Mania) . “So me and my training partner Armani, who played Big Lamonte in the movie, agreed to train him. But Kimbo became a little too … frustrated with the process. He was still a little freaked out and felt dominated, and sometimes that messes with a fighter’s psyche.

”For me, I always loved to learn something new, even if that meant getting my ass kicked cuz it made me better,” White continued. “I wasn’t there to kick anybody’s ass. I was there to share. But some fighters are just too uncomfortable with new things, even if it’s proven to work. Believe me, I’ve run into a lot of this in the past. I don’t get it.”

Perry, keen to defend Kimbo’s honor, called White out and challenged him to a bare-knuckle, backyard fight.

An actor recently was saying how he was trying to teach kimbo something too difficult for kimbo to grasp. I think you actors better stay in the movies. 1 knee make your nose look like special effects

“An actor recently was saying how he was trying to teach kimbo something too difficult for kimbo to grasp,” Perry wrote on Twitter. “I think you actors better stay in the movies. 1 knee make your nose look like special effects.”

“I just feel like #KimboSlice would beat the f**k outta @MichaelJaiWhite and his tone in the video really bothered me,” Perry added in another tweet. He should fight me backyard bare knuckle because I would like to learn this ‘prison movie technique’ he was talking about #PPV #Or #For #Free.”

As we covered above, Michael Jai White has now responded to this challenge from Mike Perry. Apparently, he won’t be flying to Florida to fight Perry in a backyard, but Perry is welcome DM him for a demo. Whatever that means.

“Maybe if MP learned my ‘Prison Movie Technique’ he wouldn’t be ranked #20?” White wrote. “I got no time for playground callouts Brother but holla when you come thru and maybe I’ll have time to give you a personal demo. Just DM me Bro. It really ain’t that hard!”

What do you think of this back-and-forth between Michael Jai White and Mike Perry?