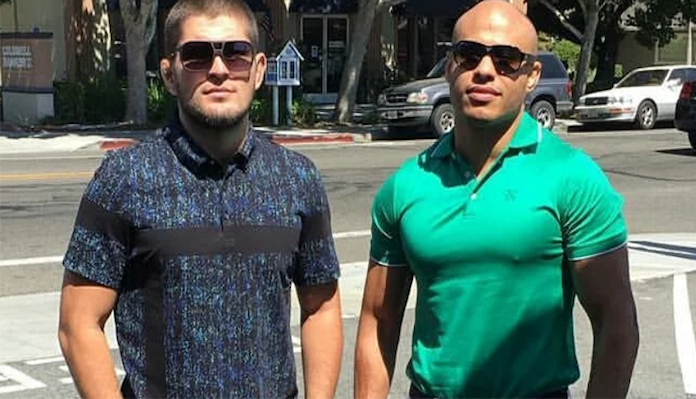 Nurmagomedov recently retired from mixed martial arts, leaving the competitive aspect of the sport with a pristine 29-0 record. Now that Nurmagomedov is no longer an active competitor, he is transitioning into coaching fighters. We have seen him in the corner at recent UFC and Bellator events, cornering fighters such as Islam Makhachev and Usman Nurmagomedov, as he looks to succeed in this next stage of his career in combat sports.

Recently, we heard Luke Rockhold, Nurmagomedov’s longtime teammate at American Kickboxing Academy, praise “The Eagle” for his coaching abilities in the training room and in the corner. Now his manager Abdelaziz is saying the same thing. Speaking to TMZ Sports, Abdelaziz praised Nurmagomedov for how quickly he has taken to coaching.

“He’s a great coach naturally. He’s a very disciplined human being. And course having Javier Mendez there to help him (at American Kickboxing Academy), of course, he’s the head coach. Khabib (Nurmagomedov) is never going to take this away from him out of respect,” continued Abdelaziz.

“But realistically, he’s just a disciplined human being. When you have this kind of discipline (that Nurmagomedov has) — the guy is worth so much money and he’s still going to a Bellator event and a UFC event and stays at a $50 dollar hotel at night. He’s got no ego. He loves his friends, he loves his peers, and he’s there for them. You’re going to see a lot of new generation (of fighters) coming from his team. They’re probably going to dominate the UFC or MMA in general.”

What do you make of Khabib Nurmagomedov as a coach so far?