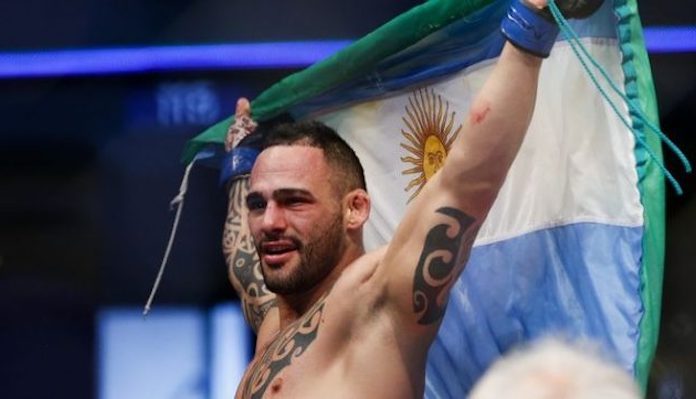 Meanwhile, Neil Magny (21-7 MMA) was most recently seen in action at UFC Liverpool, where he scored a first-round knockout victory over Craig White.

Round one of the UFC Argentina main event begins and Ponzinibbio quickly takes the center of the octagon. Magny fires off a jab. Santiago with a ton of pressure early. Neil Magny attempts to keep him at bay with his jab. Ponzinibbio leaps in with a right hand over the top. He unleashes a follow up combination and Magny appears to be in trouble. Big shots from Santiago Ponzinibbio. Magny circles off the fence and reaches for his eye. Santiago stays on him but eats a low kick. Ponzinibbio with a right hand over the top. Magny circles along the fence but Santiago cuts him off. Magny with a low kick and then a jab. Ponzinibbio continues to pressure and misses with a big right hand. He lands a nice low kick and Magny circles out. Santiago stays on him and lands a left. Magny returns fire with a low kick followed by a crisp left jab. Santiago moves in and lands a straight left. He continues to press and lands a low kick. Another good left from Santiago. The hometown favorite is showing a lot of confidence here. He lands another heavy low kick. Magny attempts to return fire but eats a right hand. Another right hand scores for Ponzinibbio. He looks terrific in there tonight. Magny continues to circle but Ponzinibbio cuts him off and lands a right hand. He comes forward with a flurry but the horn sounds to end round one.

Round two of the UFC Argentina main event begins and Neil Magny starts off quickly. He lands a jab and then a low kick. Another jab from Magny. Ponzinibbiocomes forward with a straight left. He lands a hard low kick that drops Magny. That was brutal. Santiago tells Magny to stand back up. Neil does as requested. Santiago greets him with a right hand. Both fighters connect with lefts. Another big low kicks floors Magny. Once again Ponzinibbio tells him to get back up. Magny does and walks forward with a combination. Neil’s leg is definitely sore. Ponzinibbio with a jab. Magny returns fire with one of his own. Ponzinibbio side steps and goes to the body with a jab. The referee steps in and calls a stop to the action. Herb Dean wants the doctors to check the cut on Ponzinibbio. That is a bad cut. Still, the doctors allow the fight to continue. Ponzinibbio comes forward with a big jab on restart. He lands another low kick that sends Magny to the floor. Neil is in a lot of pain here. Santiago makes him stand up and then comes at him with a ton of pressure. Magny with a front kick and then he circles off the fence. Ponzinibbio’s cut apparently came from head butt. Magny shoots in for a takedown but nothing doing. Ponzinibbio easily defends and lands a low kick. Santiago with a jab followed by a right hand. He lands a nice left jab. Magny fires back with a left hook but Santiago is stalking him. The horn sounds to end round two.

Round four of the UFC Argentina main event begins and Magny lands a right hand over the top. He follows that up with a jab and then a low kick. Ponzinibbio fires off another heavy low kick that drops Magny. He tells Neil to stand back up and then charges in with punches. Magny attempts to pull guard but Santiago isn’t having it. Neil stands back up and another leg kick sets him back down. Once again Magny steps back up to his feet but continues to eat low kicks for his troubles. Another strike drops Magny but he grits his teeth and gets back up. This fight is close to being stopped. Santiago Ponzinibbio with a left hand. Magny replies with one of his own. Another low kick from Ponzinibbio and then a right hand that floors Magny! This one is all over! WOW!