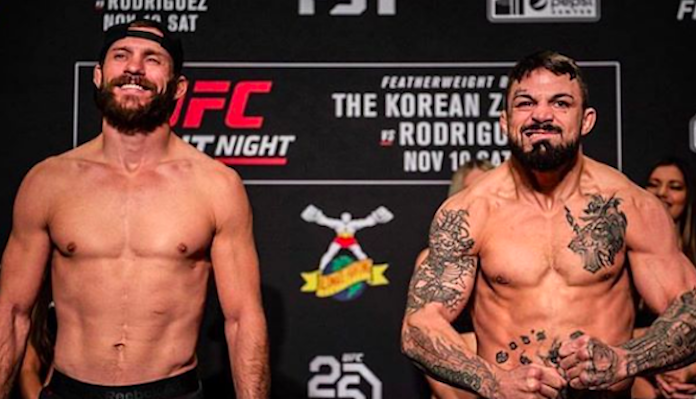 “Platinum” Mike Perry’s long awaited scrap with Donald “Cowboy” Cerrone didn’t go quite the way he planned. Instead, after grounding the fight in the first frame, Perry was forced to tap out to a Cowboy armbar.

While this is of course not the outcome Mike Perry was hoping for, he seems to be treating it as a learning experience. In the day since the fight, the fan favorite welterweight has been busily assessing the setback on his social media channels.

There were so many variables I see now that I didn’t see last night. Knowledge is power. Now I know.

“There were so many variables I see now that I didn’t see last night,” Mike Perry said Sunday on Twitter. “Knowledge is power. Now I know.”

“Drillers make killers,” he added in a lengthy Instagram post, in which he made the point  of thanking Cowboy. “We fine tuned so many things in my fight game. We did not work or drill offensive ground control and strikes from top. If I drill and flow my jiu jitsu offensive top game the way I worked on my kickboxing flow I’ll be ripping limbs off and landing effective G&P my next match. Off to get my black belt. Congrats to [Cowboy] for breaking an arm to break all the records last night. Stepping stone for me. I learned a lot and am more dangerous from it already. Thank you.”

With his loss to Cowboy, Mike Perry returned to the loss column after a thrilling decision victory over Paul Felder in July. This win was preceded by back-to-back decision defeats to Max Griffin and Santiago Ponzinibbio, and consecutive stoppage wins over Alex Reyes and Jake Ellenberger. Perry is currently 12-4 overall.

How do you think Mike Perry will bounce back from his UFC Denver scrap with Donald “Cowboy” Cerrone?