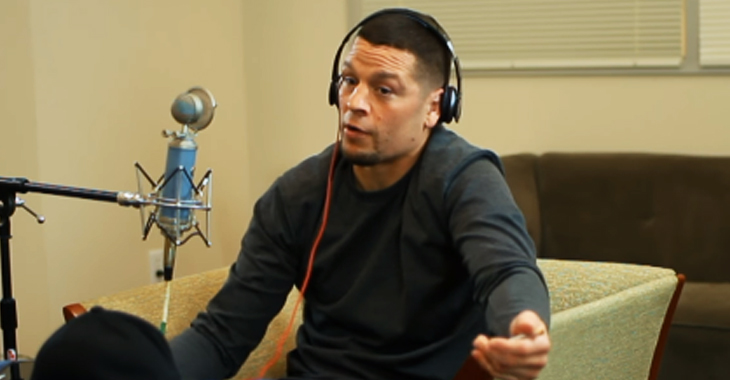 Tyron Woodley couldn’t get Nate Diaz to come out and speak when they were potentially in talks for a superfight. The only thing Dana White could draw out of Diaz is a social media Stockton slap. At the end of the day, it took hometown battle rapper Okwerdz for Diaz to walk out of the shadows and pick up a mic. …And it didn’t disappoint. In his first all-encompassing interview since May on a special episode of The MMA Hour, Nate Diaz spits more fire than can be contained within the boundaries of this article. He goes off on Conor McGregor, the UFC’s suspect marketing tactics, and being on lockdown preventing his move to boxing.

“Conor [McGregor]’s their guy. They just give him what they want to do with him and they build who they want to build and I’m not one of them, but it’s all good now, I’ll build myself. […] Yeah, a lot [of boxing promotions wanted to buy out my contract]. Years ago. They promote him as the money guy and he became bigger than everybody because that’s what they promoted him as. I was the guy bringing all the views and all the numbers. They didn’t announce it as that, so that’s why when they were going to buy out my contract [the UFC] were like, ‘Are you kidding? This is our guy. We just don’t want to tell anybody this is our guy or why because then his value goes up and he gets what he wants and we don’t want to give him what he wants, we want to give little Irish dude what he wants.'”

“The way it is that people don’t understand is, they don’t use [Nick Diaz and me] to promote. We’re the best fighters in the game. They don’t want to promote us because they already had Randy Couture, Chuck Liddell, Dan Henderson and Tito Ortiz. They already have America. You know what I’m saying? They don’t need to promote Americans, they already have America. They already got Canada with Georges St-Pierre. They already got South America with Anderson Silva. So, they got this all on lock. They needed Europe, and then they got a little loud-mouthed Conor McGregor. So, we’ll use him. So all this, it’s propaganda. It’s blown all out of proportion and it’s fine though. It’s cool he’s getting all blown out of proportion but where’s ours? Oh, they already used it all. They already got America so they don’t need us. So it’s like, if you don’t need us. Then let me be on our way. but they won’t let me be on our way so we’re living in prison.” — Nate Diaz speaking on the Outside the Box podcast.

Waving around a joint that he never lit like a magic wand, Nate Diaz cut through everything you thought you knew about… everything. In a move that brings flashbacks to his big brother, Nate wants to leave from the UFC to break out in boxing but the UFC is blocking the jump. Dana White himself has claimed Diaz isn’t a ‘needle mover’, yet allegedly wants to keep him under contract in case he and McGregor can smash pay-per-view buys. Their last fight ended up finally beating the record set by UFC 100, of course they want that power in their back pocket.