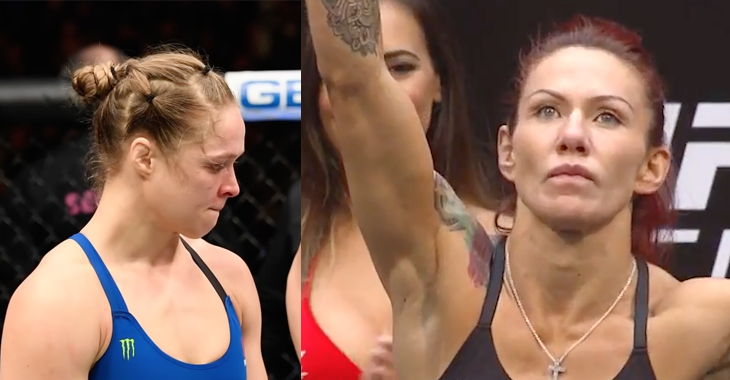 Holly Holm’s brutal, head-kick knockout of Ronda Rousey ranks among the biggest upsets in UFC history. Leading up the fight, Rousey glimmered with an era of invisibility. One well-placed kick later, and she was crumpled on the canvas in a dazed heap.

Cris Cyborg, who will attempt to defend her UFC women’s bantamweight title against Holm in the main event of UFC 219 on December 30, has a hunch as to why Rousey’s fight with Holm went the way it did. The featherweight champ believes Rousey was looking past Holm – and right at her.

“I think when Ronda fought Holly, everyone said after she beats Holly, you’re going to fight Cyborg,” Cyborg said (via MMAFighting.com). “She doesn’t think about Holly first. She already think about to accept fight with me. I think you have to think about each fight, you cannot think about already beating someone you haven’t fight yet. I think everyone was speaking of it before it happened.”

Cyborg then explained how she felt ahead of Ronda Rousey’s loss to Holly Holm, knowing she might fight Rousey if she won.

“I was prepared to fight Ronda,” Cyborg said. “I was prepared for that. And then before the fight, a couple minutes before, I go in the restroom by myself and I bow down on my knee and I pray, and I said God knows I want to fight Ronda, but I leave it in your hands. Who is going win the fight [is up to] you, if Ronda, Ronda lose, if Holly lose, Holly lose, but I know its in your hands.”

“That day, Holly beat Ronda,” she added. “And this changes everything. I said I don’t know now if I keep training to fight Ronda, or I keep training for fight with Holly, and this is my opportunity. That day, me and Holly are going to face off, I already knew that.”

What do you think of Cris Cyborg’s take on Ronda Rousey’s loss to Holly Holm?