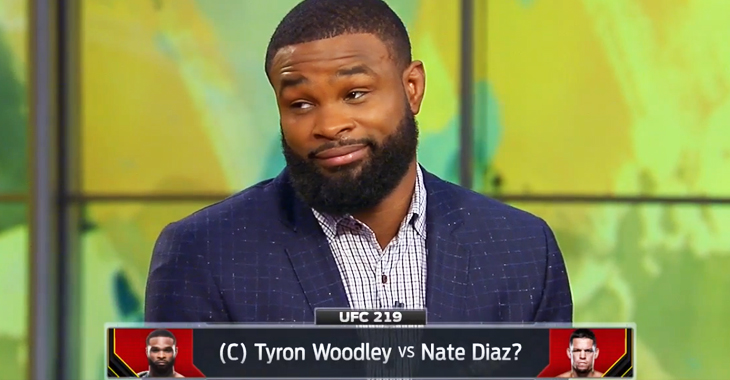 Even though Dana White recently spoke out and said the fight was never offered, it seems like some negotiations were going on between Nate Diaz’s team and Tyron Woodley. The fight seemed to come out of nowhere and then faded away almost as quickly. The UFC welterweight champ hasn’t been shy about calling out Diaz on his problematic negotiation tactics, even coming up with a $10 million split between the two, but it all fell on deaf ears. Finally, Woodley officially says the fight is dead and he’ll be moving on with surgery and the many other business opportunities on his plate.

“Well, I’m fired up because I know you booked some hotel rooms and Nate Diaz is obviously scared, homie. When someone says, ‘Hey, I want to get paid $15 million’ to fight a fighter and they’ve never received that — not even to fight Conor McGregor — that’s a nice way of saying no, I don’t want to fight them. That’s like me saying, ‘Hey, yeah. I’ll fight f-cking Stipe Miocic. Just pay me $35 million.’ That’s basically saying no. So, unfortunately, it would have been a crazy card December 30th in Las Vegas and it would have been a crazy end-of-the-year, unfortunately it’s not taking place. I’m not fighting Nate Diaz. That’s how the cookie crumbles, man. [He missed out on] a huge payday, man. He can’t run forever.”

“I’m actually going to chill out for a little bit. I  got a movie coming up that I’m going to shoot. I’ve got a lot of work on FOX, a lot of opportunities coming up. You know, your boy might be GQ in magazine. Maybe they saw the last episode when  I was getting at People Magazine for not making me the ‘Sexiest Man of the Year’. So, you know I got that thing coming up. Things are looking up for me. I am going to go ahead and undergo surgery on my shoulder. i decided a couple of days ago. It is going to be a bummer, but at the end of the day if nobody want to step up and fight somebody that’s not even 100-percent in they one shoulder, then I might as well get my shoulder to where it should be so I can continue [defending] with my belt with a little bit less risk.” — Tyron Woodley on the latest epsiode of The Hollywood Beatdown.

There you have it, all of the chit-chat about a bonkers last minute fight being added is over. UFC 219 failed to get beefed up, Nate Diaz isn’t returning anytime soon, and Tyron Woodley decided to get his surgery so he can be 100-percent to defend his belt after a clear cut contender is decided. Until then, he’s got movies, his FOX obligations and tons of other stuff down the pipeline. One thing is for sure, Colby Covington isn’t going to like hearing that.

Gabby Girl helping me pack yesterday!! Sometimes I don’t know if I’m coming or going from catching a thousand flights, working @fs1 , films, motivational speeches, and just the #grind….But my kids remind me why I do it💯💯 pic.twitter.com/OJoD1csNtv