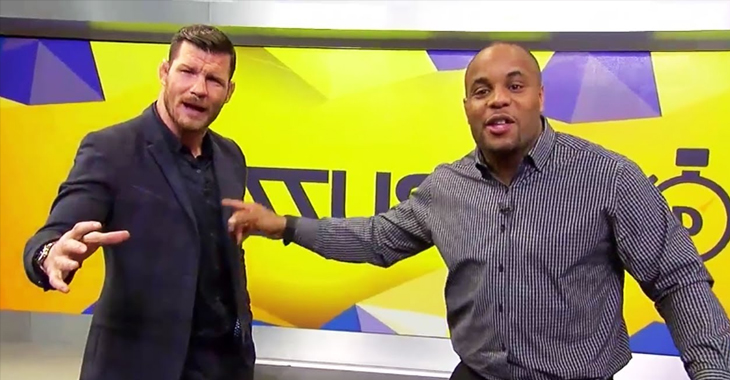 Michael Bisping is mere hours away now from arguably the biggest fight of his career against Georges St-Pierre. The former welterweight king will challenge for the UFC middleweight title, while Bisping is fighting to retain and cement his legacy as one of the greats. If he manages to take out St-Pierre, will he defend his belt against Robert Whittaker or set his goals even higher? According to Daniel Cormier, it’s possible Bisping could go up and challenge for the light heavyweight belt.

A Michael Bisping vs. Daniel Cormier superfight would be epic! @dc_mma explains why he thinks it could happen. pic.twitter.com/YaINxubrev

“[Michael Bisping] is open to a fight that’s the thing about Bisping. He tells me, he goes, ‘Be careful, Daniel. I was 15-0 as a light heavyweight. I’ll come and beat your ass and be the champion.’ So, it could happen. I mentioned it once. I was like, the matchmaker was talking to me and I said, ‘Did you see me and Mike on the show?’ He goes, ‘Yeah I saw you guys talking about a fight.’ I was like, yeah. He goes, ‘But you guys were joking, right?’ Like he wasn’t sure because if it’s something we both want to do, I’m sure they would be open to doing it.” — Daniel Cormier.

It’s the continuation of a conversation that went on a couple of months back, which we can assume was ongoing ribbing that took place on the FOX set. Of course, we’ve seen this before. Tyron Woodley and Michael Bisping had a run-in at the beginning of the year that could have potentially set up a superfight. Nothing ever went down, but it’s obviously still something that’s on Woodley’s mind. As of right now though, it’s all just talk. Bisping still has to make it out of Madison Square Garden with his gold still on his waist.

“Speaking of guys that think they can take me — which of course when I say this, most people are gonna think he can take me — I was working with Daniel Cormier at the weekend and . . . all he kept talking about all weekend was, ‘Mike, I want to fight you next. I want to fight you.’ On air, off air, at the hotel, constantly. He was like, ‘Mike, I will break you within five minutes.’ Dude, are you crazy? Do you really believe that? I don’t know if he’s joking or if he’s serious, but if he is serious, I’ll fight him next even though I said last week I’m gonna retire. I would fight Daniel Cormier because that would be a huge fight. DC is a great guy, he’s hilarious, hell of a fighter and he seems to be targeting a fight with me. So DC, if you’re serious, which I kind of think you are, then yeah, screw it, if only to annoy everyone in the world I will, again, fight somebody who doesn’t fight at middleweight.” — Michael Bisping on his Believe You Me podcast back in September.