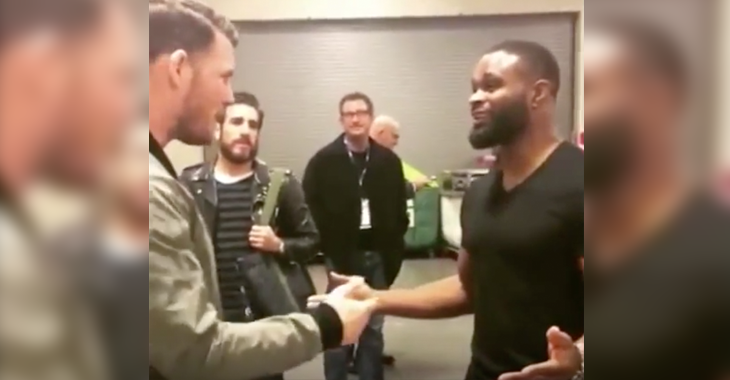 That’s exactly what the two champions were recently arranging amongst themselves as we seen the exchange between Woodley and Bisping posted on both of their social media accounts. Although there has been no official word from the UFC on any bout between the champions of the 170 and 185-pound divisions, the two are surely taking it up on their own to build up a potential match.

Woodley and Bisping got on a call on The Countdown with Michael Bisping & Luis J. Gomez and talked trash to each other with hopes of settling their arguments in the Octagon.

“Ever since you’ve become the champ and you skinned it through and got a draw in your last fight you think Lady Luck is shining down on you,” Bisping said. “Don’t believe everything that people say to you, Tyron, because people kiss the ass when you’re a world champion. But I’ve been around long enough to know that it’s all bullsh*t, so don’t believe everything that all your little team, all your little ‘yes men.’ Everything they’re telling you, it ain’t true, because I’ll do to you what f***ing Nate Marquardt did to you and beat the f**k out of you, buddy.”

“Well, you know about this lady luck because that’s what you had when you fought Dan Henderson,” Woodley stated.

“I’m down Tyron,” Bisping said later in the conversation. “It’s getting a little bit personal. At the end of the day, I’ve got a lot of respect for you. You’re a good guy. I’ve worked with you on FOX. You’re cool but f**k it. I got no problem with punching you in the face, real hard and proving to you, I’m just the better man than you are.”

“Well, we know that’s false,” Woodley replied as the two champions ribbed one another.

Who would you pick to win in a 180-pound catchweight bout between Tyron Woodley and Michael Bisping? Share your pick with us in the comment section!