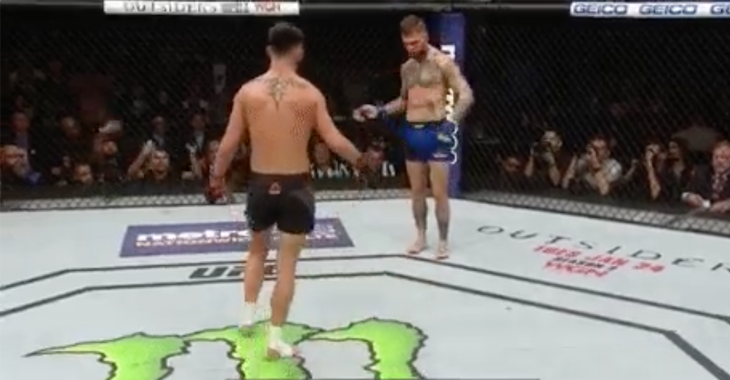 In many ways, the bantamweight title fight between Cody Garbrandt and TJ Dillashaw is the idealized version of what MMA should be. It has everything: Champion fighting challenger, actual bad blood, a gym war, feuding coaches, the true two very best in their division, and an entire season of The Ultimate Fighter on top of that. It doesn’t take the Professor X of MMA to know why this match-up is incredible, but Dominick Cruz’s wise insight is always welcome. After his experience losing his title to Garbrandt, he believes the young champ’s mental edge is an advantage over TJ Dillashaw.

“I do think that Cody [Garbrandt] beats [TJ] Dillashaw. It’s because I think that he’s kind of in the head of TJ with the whole [Team Alpha Male] team. You’re not just fighting Cody. If you were just fighting Cody, [Dillashaw’s] got a good support system, it wouldn’t be as difficult for TJ. But he’s fighting that whole team who knows everything there is about him, so they know how to get under his skin. They know what to say to [Dillashaw] when he’s in there to piss him off and get him off-track. They know what to say before the fight to piss him off. They know his weaknesses, they know his strengths.”

Someone can’t handle the truth and had to block me 😢😭😭 @TJDillashaw pic.twitter.com/R1MJvVDwJG

“If you look at the skillset versus skillset, TJ absolutely has everything he needs to go in there and beat Cody. He kicks, he’s fluid, he’s got good movement, all these things. He doesn’t seem to be rushing as much. He’s calmed down a lot since the fight with me. He kind of sits back, waits, uses space well. That will help him. His patience will help him in that fight against Cody. Things like that will help him, and he has the match-up. I honestly think just the mindset is just going to get him a little bit when it comes down to his former teammates, his former — as they put it, literally brothers. Like, you’re going and fighting your brother in battle. I don’t care who are, it’s going to effect you in different way. The question is how, right?” — Dominick Cruz said on The MMA Hour earlier this month.

You can’t really word it better than that. The top three in the bantamweight division have run far ahead of the other lot. Any one of those fighters — Cruz himself, TJ Dillashaw, Cody Garbrandt — all have the tools to beat one another. It’s not just who makes a mistake, or who is that inch better in the Octagon. In such high level contests, the mental game can give that extra percentage which leads to victory. We’ll have the answers later tonight at UFC 217.