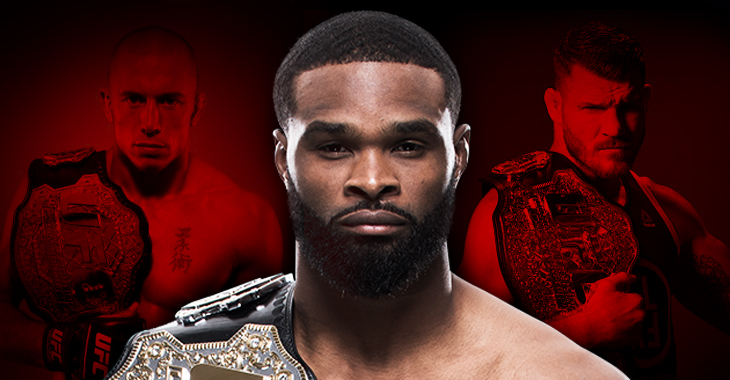 No tragic curve ball has derailed any of the three title fights stacked up top for UFC 217, that means we’re only four days away from huge fights with even bigger implications. The cherry perched atop the violence smorgasbord is Georges St-Pierre challenging Michael Bisping for the UFC middleweight title. The UFC and St-Pierre have gone on record saying if he wins, he’ll defend against interim middleweight champ Robert Whittaker, but Tyron Woodley has other ideas.

“I think my next opponent is going to be the winner of Bisping and Georges St-Pierre. I think that’s my next fight. Victorious in that fight, I think you see me move up to a different weight class. At one point in time, you look at 1, 2 and 3, and I beat them. I beat 1, 2, 3, 5. Kelvin Gastelum and Johny Hendricks were in the mix, I beat them as well. Tarec Saffiedine, who just got bumped out [of the top 15], Dong Hyun Kim, who just got bumped out. “People have short term memories on what my resume is, and my finishing ability. Out of 17, 18 victories, 11 of those were finishes, 9 of those in the first round.”

“Sometimes when you’re fighting the actual number 1 contenders — which very few champions are doing this day and age — you’re fighting the Stephen Thompsons, the Demian Maias, these fights aren’t going to be blowouts. Sometimes it’s the 4th quarter field goal that wins the fight. Sometimes it’s the grind, and sometimes it comes down to the last straw. If you know you can do that, you can come out fast and blitz someone in the first round, you can be losing a fight and come behind and win, or you can pull out a close one — It’s like bowling. Everything is not a strike, you’ve got to be able to catch those spares in there.” — Tyron Woodley speaking on the Anik and Florian Podcast.

Tyron Woodley is slated to defend his UFC welterweight title against the winner of Rafael dos Anjos and Robbie Lawler’s fight at UFC Winnipeg. However, he spoke to us earlier this month teasing there are other options contrary to the UFC’s plan, including going up in weight. Looks like Tyron Woodley has doubled down on challenging the victor at UFC 217 to potentially gain his second title. It’s clear he’s hoping Georges St-Pierre comes out on top, so he can cement his legacy by beating the previous welterweight king while becoming a two-division champion.