The Canadian is a multiple-time world champion in the ancient martial art of Lethwei – also referred to as Burmese bareknuckle boxing. ‘The Steel Giraffe’ is the face of the sport and has been hailed for his famed headbutts and general savagery by the likes of Bas Rutten Mark Coleman, Frank Shamrock, Cung Le and Joe Rogan.

I had a great time with @joerogan in Los Angeles
The JRE MMA podcast #81 is Live now!
Thanks for the overwhelming support 🙏🏼
The Lethwei Takeover 🔥

Leduc is currently on a break from competition following the birth of his son, and is looking forward to fronting the inaugural MFC show in Slovakia on October 29th.

Speaking in an exclusive interview with BJPenn.com, Leduc said,

“The first event is going to be in the end of October in Brezno, Slovakia. A good little town – so looking to do the face-off’s in front of old Slovakian castles. We’re looking to cut the ribbon as there’s a lot of neighbouring countries like KSW in Poland. There’s a big MMA scene in Europe. So i’m looking to invite a lot of friends and promoters and break bread …establish connections for sharing fighters. The goal with MFC is to have event all around the world. Afterwards we’re looking to go in Latin America,” the Canadian added.

We just confirmed the epic location for our first #MarshallFC Face-off: The Bojnice Castle, Slovakia 🇸🇰

Preparations are underway, $MRI NFT holders will soon be asked their input on the fight card. The first crypto-based combat sport promotion is about to be born! @WorldwideMFC pic.twitter.com/ergOp0YTIW

Marshall Inu has become synonymous with the Mixed Martial Arts scene in recent months and numerous UFC alumni are in talks to be a part of the show which will feature predominantly MMA fights. Meanwhile, the main event will showcase the first-ever World Lethwei Federation World title fight (160 lb) between Michael Kosik (Slovakia) and Daniel Lariviere (Canada.)

The show will be funded entirely by crypto and fans will have an opportunity to decide bonuses for their favourite fighters. Leduc has been following the progress of the token closely and described the impact Marshall Inu has had on the MMA world since arriving on the scene six months ago.

To become a well-recognized PARTNER of MANY leagues, AND an elite LEAGUE OF OUR OWN:

“MRI is a token that’s fighting for fighters,” Leduc explained.

“These guys have given over $5 million dollars so far to combat sports athletes around the world. They’ve sponsored Kamaru Usman, Jorge Masvidal, Colby Covington, Aljamain Sterling. Chael Sonnen is also and ambassador,” said the WLC champion before going on to describe the unique origin story of the token and how it ‘flamed social media.’

“It really rose to prominence at UFC 272,’ said the Canadian. “It was funny because the person holding the mic was my friend Joe Rogan – so everybody was thanking his dog since the token is named after Marshall Rogan – his golden retriever. So everybody was like, what the f*** is happening? …They kept giving money to fighters, helping Kelvin Gastelum with his knee surgery, helping Ian Heinisch with stem cell surgery and now the next big step – MFC,” he continued. 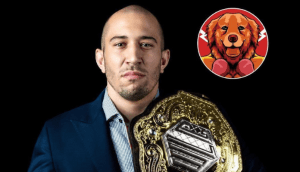 Leduc is relishing his role as president of the promotion but is still keen to step back into the ring if the right opportunity presents itself. The 30-year-old has been linked to ONE Championship and BKFC, and has an ongoing feud with Buakaw after the Muay Thai legend allegedly priced himself out of a bout against the 6’2 star.

Buakaw vs Dave Leduc is the fight to make in future 🔥💀. @bareknucklefc @BareKnuckleDF Make this happen please 🙏🏻💯 pic.twitter.com/OuIowILmS2

What do you think of the King of Lethwei’s latest project and where would you like to see him return to action?

This article appeared first on BJPENN.COM
- Advertisement -
This article appeared first on BJPENN.COM
Previous articleMichael Bisping still confident Darren Till will be a UFC champion by the time his career is over: “He’s just had a bit of a bad run”
Next articleTai Tuivasa eyes future showdown with “d*ckhead” Jon Jones: “He’s one of the greatest to do it, but I’d love to fight him”