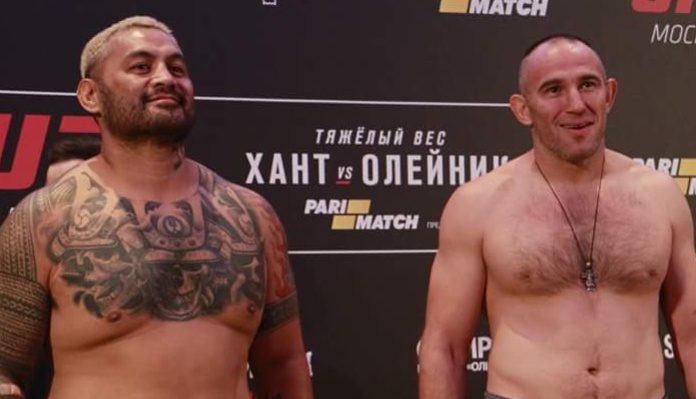 Round one begins and Oleinik starts off quickly with a pair of jabs. Hunt circles along the outside of the cage and then fires off a hard low kick. Hunt with a jab now. Oleinik eats that and presses forward. He throws a right hand and then a low kick but he can’t close the distance on Hunt. Aleksei throws a wild right hand that misses and Hunt returns fire a with a big punch that connects. Somehow Oleinik is still conscious. Hunt lands another heavy low kick. Oleinik’s leg is already bright red. He shoots in for a takedown attempt but Hunt avoids and circles out. Another shot from Aleksei but Hunt once again sprawls and breaks free. Mark is gaining confidence now. He misses with a big right hand and Oleinik catches him with a left hook. That appears to stun Hunt. Oleinik shoots in and scores a takedown. One minute to go and Aleksei is on Mark’s back. He sinks in both hooks and begins working for the rear-naked choke. He sinks it in and this one is all over. Hunt is forced to tapout.