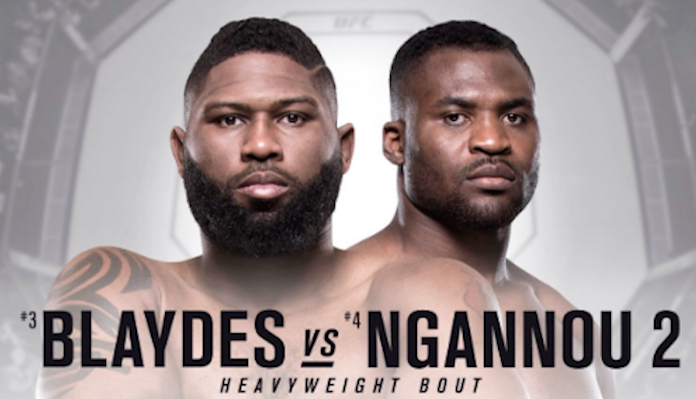 The UFC’s big debut in Beijing, China will have a suitably big main event. In keeping with recent reports, the card will be headlined by heavyweight rematch between top contenders Curtis Blaydes and Francis Ngannou.

The UFC made the bout official on Twitter on Sunday evening.

Curtis Blaydes and Francis Ngannou first met in April of 2016. The bout was Ngannou’s second in the Octagon, and Blaydes’ UFC debut. Ngannou won the fight via doctor stoppage.

Since then, the pair have realized remarkable success in the perilous UFC heavyweight division — though Francis Ngannou has recently fallen on tough times.

After defeating Blaydes, the Cameroonian-French heavyweight rattled off stoppage victories over Bojan Mihajlović, Anthony Hamilton, Andrei Arlovski and Alistair Overeem. This streak earned him a shot at then UFC heavyweight champion Stipe Miocic.

Unfortunately for Ngannou and his throngs of fans, this is where things went off the rails. Although he was pegged as a favorite to defeat Miocic, he was soundly walloped by the champion, and ultimately gave up a unanimous decision as a result. He then attempted to get back on track in an anticipated fight with Derrick Lewis, but wound up incurring another decision loss after throwing almost no strikes in a shockingly conservative display. He’s now 11-3 in sum.

Curtis Blaydes, meanwhile, has looked unstoppable since losing to Ngannou. Since then, he’s defeated Cody Easy by TKO, Daniel Omielańczuk by decision, Alexey Oleynik by doctor stoppage, Mark Hunt by decision, and Alistair Overeem by TKO. In that time, he also scored a TKO over Adam Milstead, but this win was unfortunately overturned when he tested positive for marijuana. Now 10-1 (1) overall, he’ll look to avenge the only loss on his record in Beijing.

Who do you think will win when Curtis Blaydes and Francis Ngannou battle in UFC Beijing’s main event?