Khabib Nurmagomedov has advised former opponent Dustin Poirier to avoid the “red zone” of Charles Oliveira in their upcoming fight at UFC 269.

The fight will serve as Dustin Poirier’s second opportunity to obtain the UFC’s undisputed lightweight championship. In his first effort back at UFC 242, ‘The Diamond’ suffered a submission loss to the aforementioned lightweight kingpin Khabib Nurmagomedov. 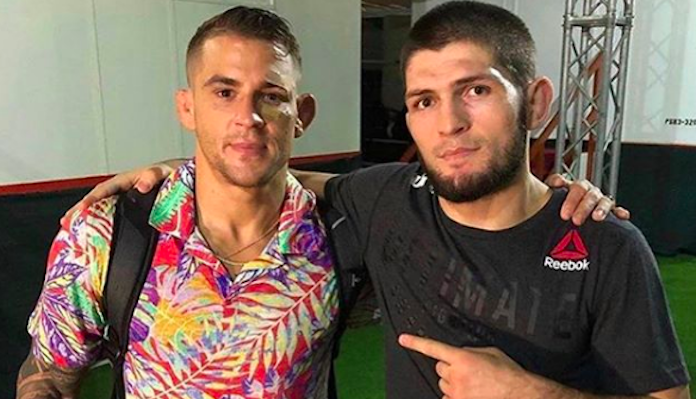 While many fans and analysts are predicting Poirier to defeat Oliveira at UFC 269, ‘The Eagle’ definitely believes ‘Do Bronx’ has a good chance of winning.

During a recent interview with ESPN, Nurmagomedov shared the following assessment of the title fight, this while warning Poirier to avoid the Oliveira “red zone”.

“You cannot go to the Charles Oliveira red zone,” Khabib explained. “This guy is real finisher, he’s very dangerous. I think if Dustin Poirier take him to the deep ocean like he told us, then I think he’s gonna win. But, if he rush, I think Charles Oliveira is gonna have a chance.”

Poirier had recently revealed his intentions of taking Oliveira into deep waters during a interview with MMA Junkie.

“I would love to for the fight to reach that point where we all find out in front of the world,” Dustin proclaimed. “That’s the goal of mine to get this fight into those deep waters and see who really wants it more, see who is willing to bleed more and leave it all out there because I know I will. No question about it.”

Do you agree with Khabib Nurmagomedov that Dustin Poirier needs to avoid the Charles Oliveira “red zone” in their upcoming title fight at UFC 269? Share your predictions in the comment section PENN Nation!