Jon Jones made headlines earlier this week when he confiscated cans of spray paint from some would-be vandals after a protest in Albuquerque.

A video was released on social media showing ‘Bones’ removing cans from two individuals who planned on executing some destruction his hometown.

Speaking to Fox News, Jon Jones opened up on his decision to intervene.

“I had a teammate give me a call, and he said ‘hey Jon, we’re having a protest, and there’s a lot of hispanics and caucasians down there, but there’s not a lot of African Americans in Albuquerque,'” Jones explained. “He said ‘we should get down there and be a black face.’ I said ‘that sounds great.’ He said ‘yeah, it’s going peacefully.’

“When I get down there, the peaceful protest was over, and a lot of people were just hanging around still,” Jon Jones added. “The vandalism started right away. I just noticed the protesters leaving and going home. No one was saying anything. No one was speaking out. Everyone was just kind of scared of these hooligans taking over the town. I’ve never seen anything like it. No police were around anywhere. People were just doing whatever they wanted to places I like to hang out at.” 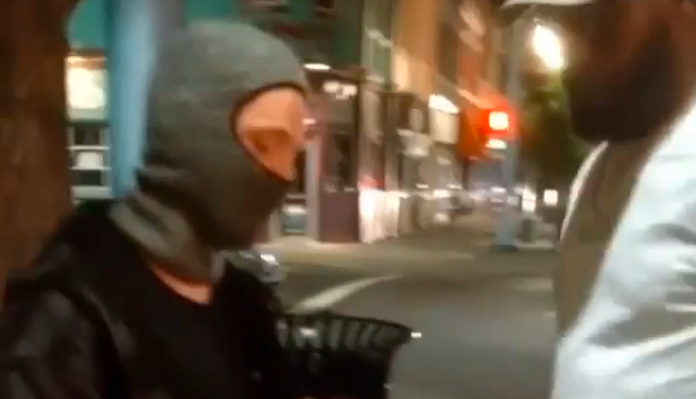 “The longer I waited and just said nothing, I just started to feel like a coward,” Jones concluded. “I was just watching people doing whatever they wanted in our community, so I just started to talk to people and say ‘hey man, it’s not the way. It’s not the way.’ I just kind realized what kind of danger I was in approaching all these masked people asking them not to do certain things. Finally I had enough of it and I just started taking things from people.”

Jon Jones rightfully received a ton of praise for his efforts to keep peace in his community during these trying times. The world has been left rocked by the shocking death of African American George Floyd, who was brutally murdered by police in Minneapolis.

The terrible tragedy has spawned ‘Black Lives Matter’ and ‘Justice For George’ protests across the globe, most of which have remained peaceful.

While Jon Jones is obviously against any violent protests taking place, other celebrities such as Chrissy Teigen, John Legend and Justin Timberlake have been posting thousands of dollars in an effort to bail out individuals who were arrested for looting in Minnesota.

Tonight ‘Bones’ was asked by a fan to share his thoughts on celebrities bailing out and supporting looters in the United States.

I look at it pretty simply, there’s protesters and then there’s looters. https://t.co/X9ohBeI3nc

“I look at it pretty simply, there’s protesters and then there’s looters.” Jones responded.

The promotions reigning light heavyweight champion recently announced that he would be vacating his belt, this while suggesting that top contenders Dominick Reyes and Jan Blachowicz fight it out for the vacant 205lbs title.

Do you agree with Jon Jones assessment of celebrities supporting looters and bailing them out of prison? Share your thoughts in the comments section PENN Nation!

This article first appeared on BJPENN.com on June 2, 2020