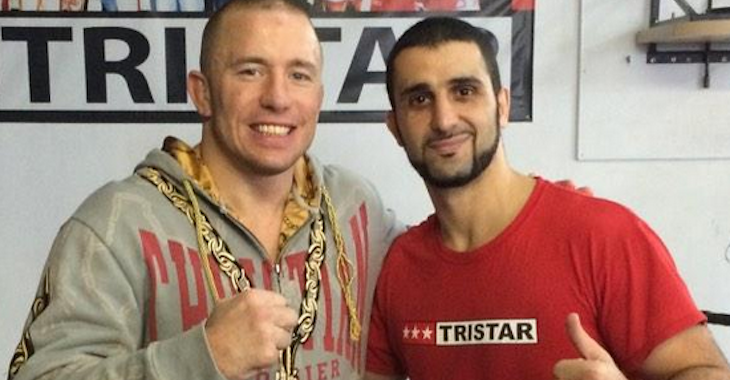 Michael Bisping has said everything he can in the lead up to UFC 217 to tear down Georges St-Pierre as an opponent. He’s brought up stories and controversies from many years ago, he’s poked holes in his record, and he’s accused him of using steroids. All is fair in love and war, right? Georges St-Pierre’s coach Firas Zahabi recently spoke out about Bisping’s comments and refuted them. He insists he’s drug free and just that good.

“[Michael Bisping is making steroid accusations] because Georges [St-Pierre]. About 10 to 20 percent of the population is naturally ripped. Georges just happens to be one of those people. You look at him as he was growing up, he’s just naturally ripped. He’s been tested, he’s volunteered to be tested, and he’s paid out of his own pocket to be tested and for his opponent to be tested. He’s never failed one single test. Just because somebody’s lean and extremely competent in fighting doesn’t mean they’re on drugs. That’s the truth.”

“Bisping was always the best. After USADA, we know he’s really the best. They weeded out a lot of possible influences on that category. Is it a coincidence that Bisping is the best after USADA? Is it a coincidence? That’s my question. I don’t think it is. Not just the drugs, but the weight-cut difference. It changed the category. Bisping has now risen to the top, so I really think he’s the best, the best middleweight. Until somebody beats him, he’s the best. I think personally the sport is a lot cleaner. That’s just my opinion. I don’t have any hard facts or data or anything like that. I find it’s cleaner, but I still suspect that a lot of guys are still finding ways to work around the system.” — Firas Zahabi speaking to MMA Junkie.

It’s worth mentioning, that Bisping recently clarified that he believed St-Pierre was currently a clean athlete, but rose suspicion about his career before he left the UFC. Firas Zahabi was surprisingly complimentary of Michael Bisping, given the comments about St-Pierre. Regardless of what anyone says or has done, it will all be settled in just one week. Super-stacked UFC 217 goes down at Madison Square Garden on November 4th. Clear your schedule, because those fights are incredible.