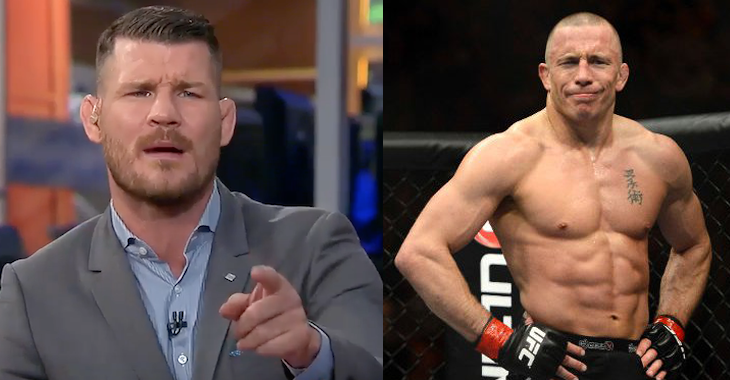 Michael Bisping is just a month away from fighting Georges St-Pierre to defend his UFC middleweight title. The fight went through many dates and delays, in part due to a very long negotiation process with company brass and an eye injury St-Pierre suffered. Back when everything was still up in the air, Bisping and St-Pierre had a press conference where GSP accused Bisping of being drunk. The champ admits he had some fun the night before on the latest episode of his podcast, because he was in Vegas and had no idea when he’d get to fight St-Pierre. He also launched an accusation of his own.

“I’d had a heavy night before and Georges [St-Pierre] was taking pleasure in [mocking me for my behavior]. So f-king what Georges. I’m 38 years old and I’m in Las Vegas. If you’re man enough to fight me anytime soon, I won’t be drinking. When I’m training for a fight I’m very, very dedicated but of course, I’m not training for a fight because I don’t know whether it’s because Georges needs to clear the steroids out of his system before he enters the USADA testing pool. I don’t know what the reason is but that is definitely a potentially valid reason because you’ve got to get tested for six months before you come back and he did his best to delay it so maybe that was why. I’ve been tested twice in this training camp, and I guess they’re gonna’ give up because they never get a sniff of anything with me. Never. And it costs a lot of money to send those agents out here. I’ll probably get another busy talk to throughout the training camp. I want to know how many times are they testing Georges St-Pierre?”

They keep evolving and so do I. Get the brand new T3 boxing gloves by @hayabusacombat with my discount code: GSPisBACK pic.twitter.com/8jmApQck5o

“I was training with someone recently who shall remain nameless and he was telling me that [Georges St-Pierre] was on something. He’s not part of my regular team but I couldn’t help but notice the massive amount of muscle that this person had and he told me, he was very frank about it. I’m very naive when it comes to steroids but he said it’s in and out your system in one day. One day! Holy sh-t! I didn’t even know such things existed, I really didn’t. That’s how naive I am and that’s what all those motherf-ckers are taking, I’m telling you. So USADA, if you’re listening, get your ass up to Canada and test Georges. Hide out in his apartment block and get the motherf-cker on the way to the gym.” — Michael Bisping speaking on his Believe You Me Podcast.

For what it’s worth, Georges St-Pierre has been tested a total of 10 times since jumping back into the USADA pool, Bisping also had a similar amount of testing. Both Michael Bisping and St-Pierre respectively have been vocal proponents of strict testing for UFC fighters. With so many cards having fights pulled and Jon Jones being stripped of the UFC light heavyweight title though, it’s clear that doping is still an issue in the sport at the highest levels.