Fedor Emelianenko has expressed surprise at some his countrymen’s reluctance to join the war between Russia and Ukraine.

The conflict between the two Eastern European nations has been ongoing since February, and Vladimir Putin recently announced a partial mobilisation of 300,000 troops with military experience.

Reports subsequently emerged of a number of Russians avoiding the draft, and notion that has brought shock to ‘The Last Emperor.’

“For me personally, it was a great discovery and a slight shock when you read the news in our country, what is happening in the military registration and enlistment offices and that people are fleeing the draft,” Emelianenko told Championat.

The former Pride heavyweight champion has a relationship with Putin with the Russian leader known to be a fan of MMA having attended several of Emelianenko’s fights.

The 46-year-old served shock at the reports of people dodging the draft may stem from him being a fellow serviceman himself. The MMA legend was in the Russian army between 1995-7, initially as a military firefighter and then a member of the Tank Division.

Rare images from Fedor Emelianenko in his army service from 1995-1997. #bellatormoscow is in 8 days!

If the situation in his homeland escalates then he may well find himself back in uniform, along with some of his comrades. The 6-foot star is mentor to the likes of Bellator light-heavyweight champion Vadim Nemkov, and he explained that he and his team are prepared to heed the call should it come.

“We live for today but we are all getting ready,” Emelianenko said.

Emelianenko may be in the sunset of his career but he rolled back the years with a knockout victory over Tim Johnson in Moscow last year and is riding a two-fight winning streak.

According to Scott Coker, the Russian icon is keen to have one more fight before calling it a day and he’d love another crack at Ryan Bader.

Speaking to reporters earlier this week, the Bellator boss said,

“He (Emelianenko) wants to fight Ryan Bader. That’s what it comes down to,” Coker said. “He wants a revenge fight, and he wants to have the title shot. So, we haven’t really gotten too much into that, but that’s what his requests have been in the last three or four texts that I received, so let’s see how that goes.” 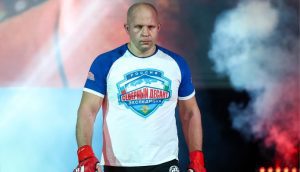 This article appeared first on BJPENN.COM
Previous articleJake Paul plans to keep a “close eye” on Uriah Hall vs. Le’Veon Bell as he hints at fighting the winner in the future
Next articleFernand Lopez reveals the threatening messages he received from rival manager and “owner of MMA media” Ali Abdelaziz over Slim Trabelsi dispute: “Release him or you’re going to get hurt”
© Newspaper WordPress Theme by TagDiv